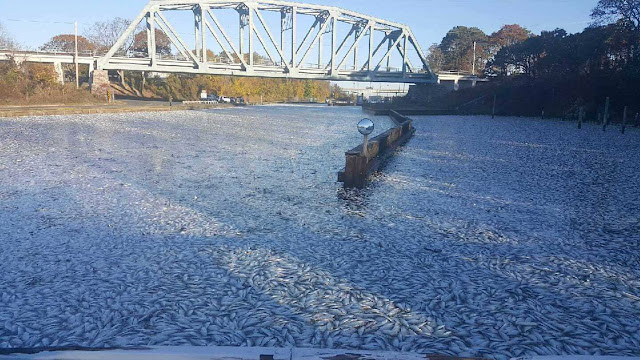 Photo WABC
A massive fish kill carpeted the Shinnecock Canal, both north and south of the locks, with countless dead menhaden, or bunker, on Monday morning.
Fish kills are a natural phenomenon that occur from time to time in bodies of water and are typically caused by a lack of dissolved oxygen when a massive number of fish gather.
The cause is unclear, but most believe the bunker were chased by predatory fish, like bluefish and striped bass, through the Shinnecock Inlet, up into the Shinnecock Bay and into a closed lock at the canal, where they were trapped in enormous numbers.
“I think the bunker were so thick along the beach that they came into the inlet and got trapped, because the locks were closed,” Southampton Town Trustee Bill Pell said on Monday morning. “They had no place to go—and the bluefish and striped bass hammered on them.”
Dr. Chris Gobler, a professor in Stony Brook University’s School of Marine and Atmospheric Sciences, said that in the 20 years he has lived in the area, he has never seen a fish kill in the canal. Mr. Caldwell estimated that there were about five million pounds of dead bunker in the canal as a result of this fish kill.
Mr. Schneiderman said at 8 p.m. on Monday night, the canal was filled with fish.
“It was literally like you could walk across it,” he said.
As to whether a fish kill of this magnitude will happen again in the canal, Mr. Schneiderman said he doesn’t think so.
“We may not see this even happen in our lifetime, but we’ll have a sense of what worked and what didn’t,” he said.
Full story here