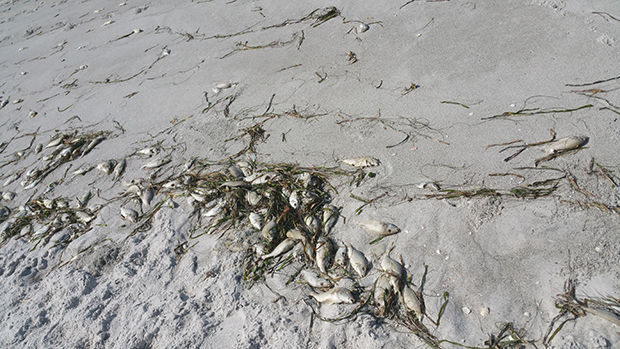 Photo Betty Anne Mullins
Hundreds of dead fish are washing up on shore on longboat key, and it appears red tide is to blame. Reports of dead fish washing ashore started coming into the newsroom late yesterday with residents sending photos of dozens of dead fish along the shore.
There are fish along Gulf of Mexico Drive down to the north end of the key.
The Fish and Wildlife Commission was called on Monday to take samples of the water and some of the fish. People who live nearby are now dealing with the foul smell.
"Yesterday was the first time that I walked out of the building and noticed a smell. I thought, oh wow, it's not supposed to be low tide until 9 O'clock tonight," Said Cyndi Tessler, who is visiting Longboat Key.
"I came down to the beach and my husband said, 'take a look,' and there were dead fish everywhere." According to the FWC, initial reports show that in the Long Boat Key area patches of high concentration of red tide are present in Gulf waters.

Thousands of dead fish washed ashore in Russia's Sverdlovsk region: The lake is the main source of drinking water for residents
at September 21, 2016