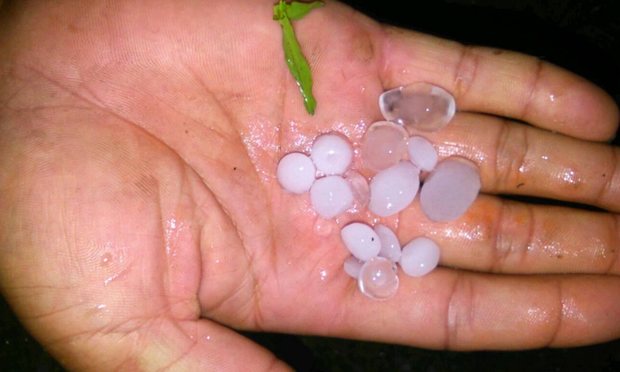 Photo www.theguardian.com
Samoa has been hit by a hail storm so rare that it was believed to be a hoax by many of the island's inhabitants.
The tropical nation of Samoa lies in the Pacific Ocean, where the average temperature at this time of year is 29C.
But on Friday evening an unexpected hail storm struck the eastern side of the island of Savai'i, accompanied by heavy rain and strong wind gusts.
It was only the second time since records began that hail has fallen on Samoa, the first was in 2011. The storm lasted 10 to 15 minutes and produced hail stones roughly 2cm wide.
"The ice was very small and there were no reports of damage," said Luteru Tauvale, principal meteorologist for the Samoan Meteorology Service.
"Because it was so unexpected a lot of people thought it had been invented.
We had to release satellite images of the conditions that led to to the hail for people to believe it was real."
Samoans took to social media to share their photos of the hail, many voicing disbelief at the incident, and then saying it was the "first time" they had been convinced of the the phenomenon of climate change.
"Climate change is here!" wrote one Samoan on Facebook. "More like we have just woken up to the fact it had been with us for a while but we refuse to accept/believe it."
Hailstorms form within a unusually unstable air mass in which the temperature falloff with height is much greater than normal.