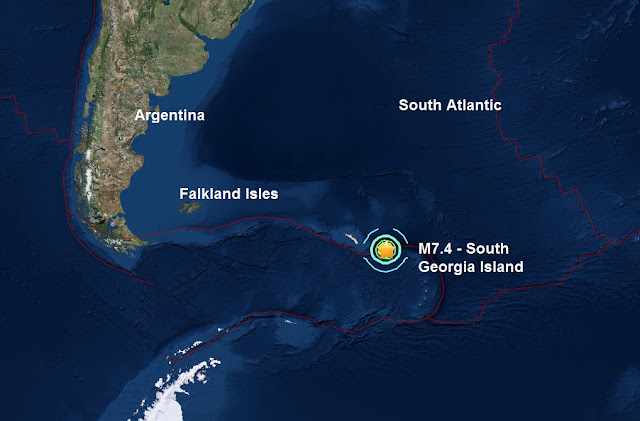 A massive magnitude 7.4 strikes South Georgia Island region.
No current tsunami warning is in effect.
A magnitude 7.4 has hit the South Georgia Island region this morning, August has been the month for mag 7+ quakes, last week powerful 7.2 magnitude earthquake struck off the South Pacific island nation of Vanuatu.
Friday's quake initially was registered with a magnitude of 7.6 but was later downgraded to 7.2.
At the end of last month, a  masive magnitude 7.7, struck the Northern Mariana Islands.
The massive quake was the third biggest of this year after the mag 7.8 in Sumatra, Indonesia, in March and the deadly mag 7.8 in Ecuador in April.
Todays quake is the 6th major quake of August, see below and the 86th of 2016...