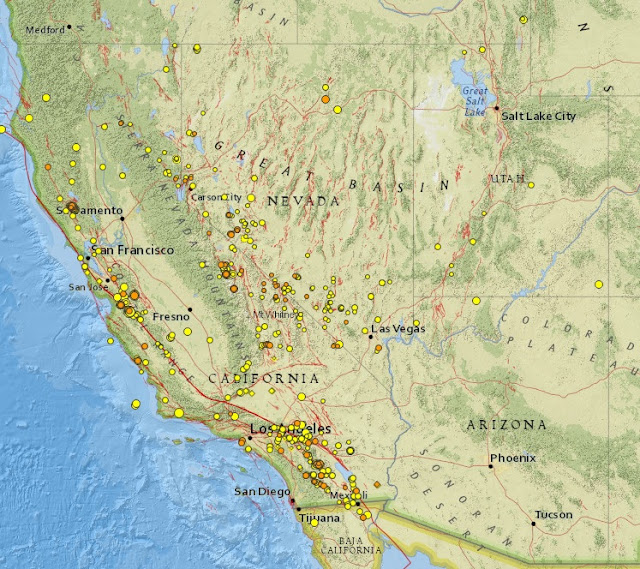 USGS
An earthquake swarm is continuing to rock and roll in San Benito County.
In the past four days, hundreds of tremors have hit near Hollister on a section of the San Andreas system known as the Calaveras Fault.
Between Sunday night and Monday afternoon, 39 quakes greater than 1.0 have occurred and 20 more than 2.0, seven over 3.0, one 4.1 and one 4.2, according to the U.S. Geological Survey.
The first struck Sunday night at 10:26 a.m., 12 miles southeast of Hollister, and had a preliminary magnitude of 3.3.
Over 260 people reported the incident to the USGS.
The largest quake recorded on Monday gave a gentle shake at 2:27 a.m., 12 miles northeast of Hollister, and had a preliminary magnitude of 3.8.
Several quakes shook the area on Tuesday, including a 4.2 trembler recorded 11 miles southeast of Hollister and 17 miles east of Salinas.
On Wednesday, tremors continued to gently shake the area, and the USGS recorded two 3.0 earthquakes.
One hit 12 miles southeast of Hollister at 5:14 a.m. and another two miles southwest of San Juan Bautista and nine miles west of Hollister at 7:08 a.m.
No injuries or damage have been reported.
Earthquakes with a magnitude of 3.0 are common along this area of the fault, and swarms occur more rarely.
A series of 4.0s and 4.6s hit in the early 1970s, and in 2001, the USGS recorded three earthquakes around 4.0.
"This part of the Calaveras Fault creeps and it continually deforms," explains Ole Kaven, a research geophysicist with the USGS.
"What that generally suggests is that strain doesn't build up to create very large earthquakes, though that possibility can't be entirely excluded."

A mag 6.0 - 76km NNW of Isangel, Vanuatu is only the third major quake of July

A magnitude 6.3 - 32km NW of Rosa Zarate, Ecuador is the first major quake of July