A massive spike in earthquake activity at the summit of Mauna Loa volcano, on Hawaii's Big Island has scientists on alert as the biggest active volcano in the world has begun to erupt! More than 300 earthquakes have been registered in the last few days under Mauna Loa! 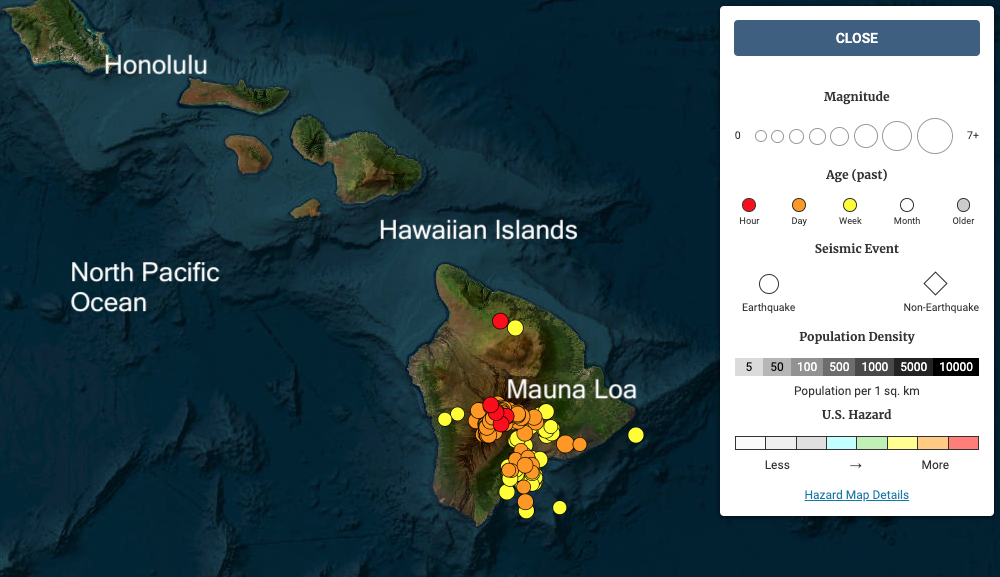 Credit USGS.
With a massive spike in earthquakes at the summit of Mauna Loa, scientists have been on alert for an eruption of the biggest active volcano in the world!
Mauna Loa, the largest active volcano in the world, has begun to erupt in Hawaii, the U.S., prompting officials warning people living on Hawaii’s Big Island to be ready in the event of a worst-case scenario.
The eruption started late Sunday at about 11:30 p.m. HST in Moku‘āweoweo, the summit caldera of Mauna Loa in Hawaii Volcanoes National Park, according to a USGS Hawaiian Volcano Observatory alert. The observatory said it was working closely with emergency management partners. The eruption had remained confined to the summit caldera early Monday, but USGS Volcanoes and the Hawaii Emergency Management Agency later reported some overflowing on the southwest portion. Shortly before 12:20 p.m. EST (7:20 a.m. HST) USGS Volcanoes announced the volcano's eruption had moved to the northeast rift zone, with lava flows heading downslope to the north.
In a later update, USGS Volcanoes announced that the eruption in the northeast rift zone was still ongoing but no lava was erupting from the southwest rift zone. "We do not expect any eruptive activity outside the Northeast Rift Zone. No property is at risk currently," USGS Volcanoes said on Twitter. An eruption from the northeast means lava could flow towards Hilo, Hawaii, or other locations in East Hawaii, but it could take the lava weeks or even months to reach people. Lava emerging from a southwest rift zone could reach communities in hours or days.
USGS Hawaiian Volcano Observatory said the lava flows are not threatening any nearby communities downhill at this time. Still, volcanic gas, fine ash and Pele's Hair, thin strands of volcanic glass, could "be carried downwind."The Observatory added that it appears the eruption will remain in the northeast rift zone. "The shift of the erupting area into the northeast rift zone takes the hazard into much less steep terrain," Hawaii Emergency Management Agency tweeted following the development.
"Eruptions on steep terrain move quickly downhill while lava is still very hot and liquid. Shallow slopes allow it to cool more as it moves downhill, slowing its progress even more.
NE rift zone eruptions may take weeks or months to reach the sea, vs. hours on steeper slopes." While nearby communities are not threatened at this time, shelters have been opened as a precaution in Kailua-Kona and Pahala.
Lifelong Big Island resident Bobby Camara, who lives in Volcano Village, said everyone across the island should keep track of the eruption. He said he’s seen three Mauna Loa eruptions in his lifetime and stressed the need for vigilance. “I think everybody should be a little bit concerned,” he said. “We don’t know where the flow is going, we don’t know how long it’s going to last.
”The USGS encouraged residents who are potentially at risk from Mauna Loa lava flows to review their eruption preparations, noting that past events show lava flows can "change rapidly." The Hawaii County Civil Defense also has a Mauna Loa Lava Inundation Zones map for reference. "If the eruption remains in Moku‘āweoweo, lava flows will most likely be confined within the caldera walls. However, if the eruptive vents migrate outside its walls, lava flows may move rapidly downslope," the USGS Hawaiian Volcano Observatory wrote in its Sunday night alert. Portions of the Big Island were also under an ashfall advisory Monday morning, though it ended later in the day.
Officials cautioned people with respiratory illnesses or sensitivities to take precautions, even after the advisory was lifted. The Hawaii Department of Health advised residents and visitors to prepare for air quality impacts due to the eruption on Monday afternoon. The department warned that "the eruption could cause vog conditions, ash in the air, and levels of sulfur dioxide to increase and fluctuate in various areas of the state."
With conditions changing rapidly, the department advised people to take precautionary measures, including reducing outdoor exposure and wearing masks if outside to limit inhalation of hazardous particulates.
Because of a spike in earthquakes at the summit of Mauna Loa, scientists have been on alert for an eruption. With Sunday night's eruption, the volcano alert level for Mauna Loa has increased from advisory to warning, and its aviation alert upgraded from yellow to red. Mauna Loa, which last erupted in 1984, rises 13,679 feet above sea level. It's among the five volcanoes that make up Hawaii's Big Island. Mauna Loa sits immediately north of Kilauea volcano, which is also erupting – but with a "watch" volcano alert level and orange aviation alert, according to the USGS Hawaiian Volcano Observatory. A 2018 Kilauea eruption destroyed 700 homes and sent lava into the ocean. Because Mauna Loa is taller than Kilauea, experts note, it could rush down some of its hillsides faster because of steeper slopes – possibly in a matter of hours.