COVID LIE—After 2 years of sanctions, travel restrictions, mask regulations and vaccination mandates—Millions are suddenly allowed to cross borders into Europe without being checked, segregated or even masked and 5 in every 100 Ukrainian has Covid

Over the weekend I have, like millions of other worried citizens watched the invasion of the Ukraine by a Russian military led by a leader who at best appears unhinged and at worst resembles a tyrant who’s whole world is collapsing around him and doesn't know his next move. 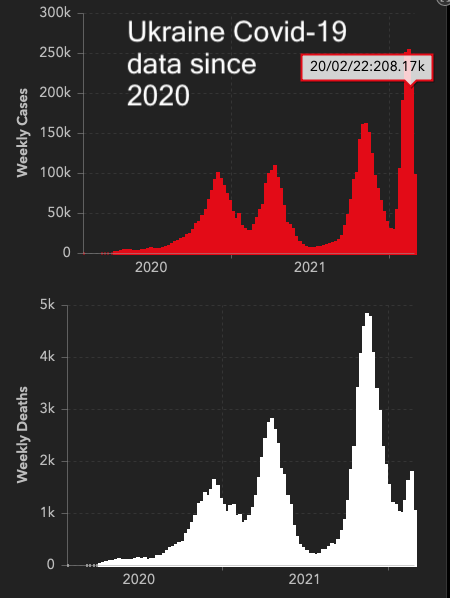 Putin aside, I have held a suspicious eye on the European leaders and their mighty media during the conflict. At the beginning of last week many European leaders, along with Boris Johnson—Suddenly and unexpectedly began lifting many sanctions and travel restrictions regarding Corona, even though 14 million new cases had been reported world wide and 70,000 deaths had been recorded.

A week later, more than 500,000 Ukranian refugees were fleeing into Poland, Romania and Hungary with another 3.5 million people expected to follow in the coming days. As the tragic story unfolds all European leaders and the UK are falling over themselves to allow Ukranian refugees into their countries—And quite right too of course!

However, what I want to bring to your attention to is—Since the refugees began to move West, on-mass and most of them without masks I have not heard one reference to Covid-19, not one! Now, let me put that into some kind of perspective, since March, 2020 we have not been able to breath without being warned of Covid-19, now suddenly—Nothing, zilch!

Surely the Polish, Romanian and Hungarian border control would at least would be wearing masks and giving masks out to the refugees? Last week Ukraine reported more than 200,000 weekly cases and the week before more than a quarter of a million. According to those figures 5 people in every 100 crossing the Ukrainian border has Covid? The whole situation is a ticking-time-bomb and by now we should at least be hearing reports of covid sickness—But we are NOT and that stinks because for the last two years we have been locked-down, banned from working, going out and travelling because our lives have been in danger, apparently!

In the space of a week—Millions of people can suddenly cross borders into Europe without being checked, segregated or even masked. Folks, if you needed proof we have been duped during the last two years, here it is.

And damn right you are Sir !

Fear...that's what it's all(been) about, and now there is a new player on stage.

Time to up the energy price even more, food will be up up up and shortages are around the corner.

Buckle up everyone, the S is G H T F.

1) They are not “vaccines,” given the recent re-definition

of that term by the Medical Mafia—they are EGIs :


3) Masks are useless because of the definition of a

why the so-called “virus” ( and variants ) - never has

been isolated, but depicted by pretty drawings ! - is

1/10 the size of a MICRON, passing through masks like

tossing sand through a chainlink fence.


It’s all been Kabuki Theatre for effecting POWER,

CONTROL, and PROFIT—by the Medical Mafia of

Russia's Ukrainian invasion is why we have $inflation now choking us? Lol...oh, I didnt know that mr president, thanks for sharing! I thought it was because of your(s) ((and Trump's and Obama's)) November 2021 "1.2 TRILLION$$$$ bipartisan infrastructure LAW "investment" package(s) spending.

What are our debt numbers these days? 100 trillion? 50 trillion?. See I thought that coupled with a significant lack of workers and drivers of supply chains from your mandate to inject poison vaccines was why inflation is really being noticed now. So good to know none of that is the cause, its Russia! Oh, good thing we have such a brilliant man for president. It's not the fiat money or the covid related mandates. What a relief.
Thanks so much for more "promises" to "invest" more dollars in to, free covid tests & free anti-viral RX drugs ("test to treat"), more rocket launched internet related satellites access, and reducing the burden of child & elder care on workers!

* google news links this a.m. ... after presidential speech last night included:
www.wtrf.com/news/u-s-government-website-prepares-you-for-a-nuclear-explosion/
(Ready.Gov)
Warnings of free gov covid test kits mailed to US public causing increased poisoned victims in to hospitals and graves. (Lost that link, scrubbed?) Try a search.
*Real life (not media news)- 55+ residential community this past week. Personally witnessed, 2 days of emergency ambulances at my neighbors, one I was there working for as it occurred, massive strokes! Blood clots in brain. Vaccinated 3 shots! 75 years of age (elders).
Temps in FL all week near 90 degrees. Air conditioning on last night, space heater this morning, cold front yesterday.

Hi, Hawkeye, I missed you too—Welcome back!

The world is crazy!