A volcano explodes off the island of Tonga blasting dust an incredible 60,000ft, almost 20km into the sky which will have a cooling climate effect for at least the next couple of months at least: The blast was almost as strong as the Krakatau eruption which caused a volcanic winter 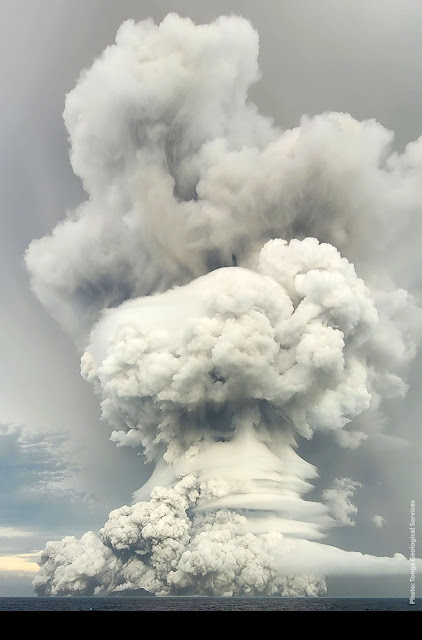 Credit, Tonga Geological Services:
The eruption of the Hunga Tonga-Hunga Haʻapai volcano sent shockwaves across the South Pacific. Tonga's capital lies just 65km north of the volcano.
An underwater volcano has erupted off the island of Tonga blasting rocks, ash and steam an incredible 60,000ft, almost 20km into the sky which will have a cooling climate effect for at least the next couple of months and depending on the duration and size of the eruption could cool the planet...
The shock wave from the eruption is expected to reverberate around the world and windows have been broken from the blast hundreds of km's away.
The strength of the massive eruption was VEI 5, let me put that into some kind of perspective, the famous Krakatau eruption in 1883 was a VEI 6. According to Wikipedia, the Krakatau eruption caused a volcanic winter. In the year following the eruption, average Northern Hemisphere summer temperatures fell by 0.4 °C (0.72 °F). The record rainfall that hit Southern California during the water year from July 1883 to June 1884 – Los Angeles received 970 millimetres (38.18 in) and San Diego 660 millimetres (25.97 in) – has been attributed to the Krakatoa eruption. This eruption could be the perfect geological event to cool the planet and will have the climate change people jumping with joy!
The head of Tonga Geological Services, Taaniela Kula, told RNZ Pacific that at 4am on Friday 15 January, the eruption was picked up on satellite. Kula said the eruption on Friday was almost seven times bigger than the one on 20 December, bigger in terms of the radius of the plume that was scattered from the volcano, up to 250km away from the volcano radius. A tsunami warning lifted but volcano still monitored. 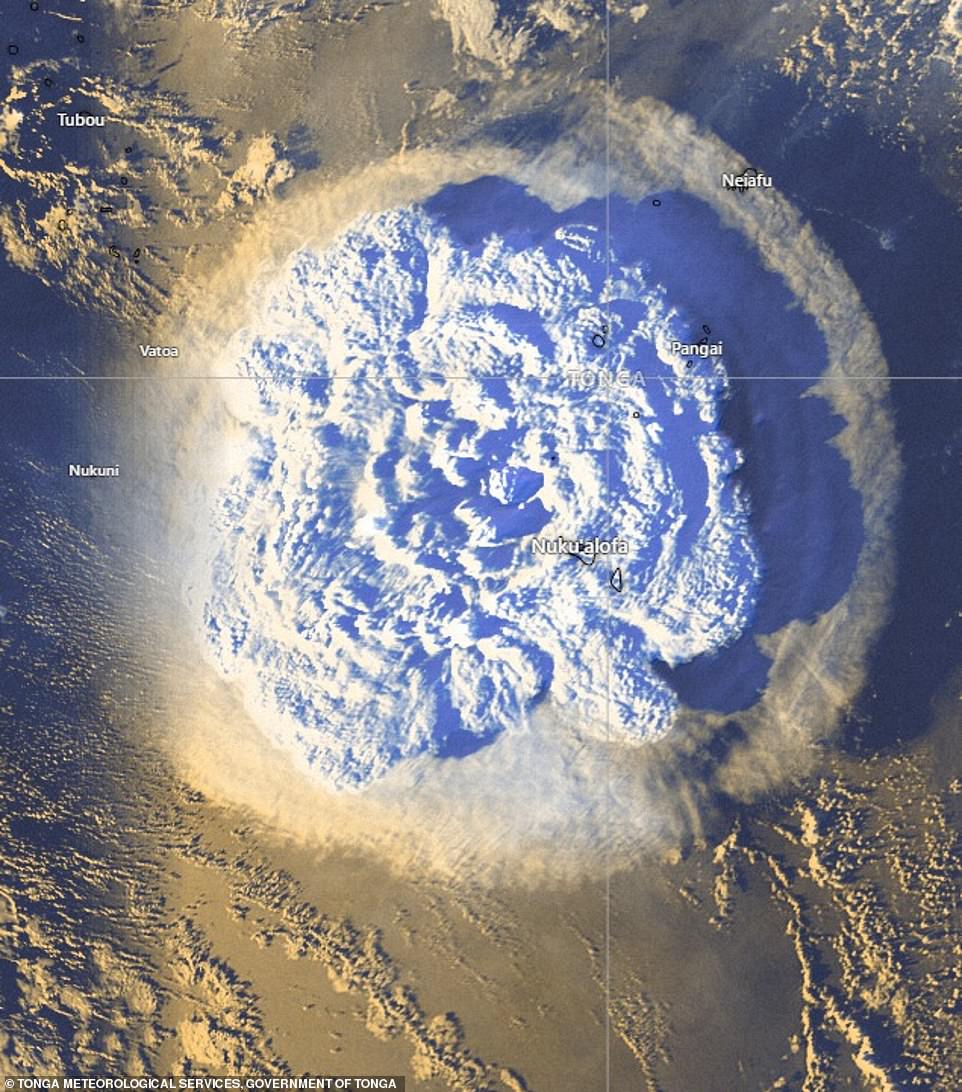 Credit Tonga Geological Services
2022 has seen a remarkable uptick in solar, seismic and volcanic activity in the first couple of weeks of the new year.

We know seismic events on earth are influenced by our sun and so far this year the sunspot count is more than out-performing the "experts" predictions.

Solar Cycle 25 is heating up in 2022. New sunspot counts from NOAA confirm that the young solar cycle is outperforming the official forecast. Sunspot counts have exceeded predictions for 15 straight months now. The monthly value at the end of December 2021 was more than twice the forecast, and the highest in more than 5 years, according to Spaceweather.com. Last year's major quake total of 160—(mag 6 or higher) was the highest yearly count since the record 'bustin year of 2011 and 2022 has been a record breaking start since records begun. Full story

Dear Gary,
I felt and heard this thing go off as others in my part of the world did as well. It woke me from a dead sleep and I was up for a long time listening to what I thought fireworks at first. Then as I realized that after some of these blast went off my cabin would slightly shake, earthquake style.

As my cabin is built on columns that run about 10 feet into the ground and the cabin is 4 feet of the ground I feel all kinds of shakes. As we are going through a solar outburst I expect more of this especially on the 17th. thank you for these updates.

Blessings from Alaska, just me, Laughing-Bear

This is an unforeseen event example of what I wrote in your comments recently. "We have time"...until one catalyst earth event occurs and speeds everything up to get us closer to the return of Christ as prophecies describe.
But this isnt it! A 2 foot tsunami wave warning?! Ha ha, ok.
Great satellite photo though, shows the geoengineering shit real clear. All that gold colored stuff in the cloud layer is it! See how it looks reflective? Wake up world! We dont need a quake or volcanic 2 ft tsunami we have geoengineering poisoning us every day!

It is ironic though that it is in NZ proximity aim, and that government is so corrupt and evil. Hopefully it is only the beginning of earth firing back at all our evil doers! Stay tuned! It sure is over due.

Wow! you are thousands of miles away Bill! Incredible, stay safe up there buddy, love from Holland.

And just how much CO2 did it release? How many years of equivalent man made output? Global warming harpies are going to try to pin all this on the climate truthers.

Two months to answer your question with actual data. Only two mere months. Expect global cooling for the next 365 days at minimum.