Monster Sunspot AR2860 is big, and it's ready to flare: We keep on getting lucky but as the Earth's magnetic shield weakens it's just a matter of time before a "SOLAR KILL-SHOT" AR2860 is crackling and has a "beta-gamma" magnetic field that harbours energy for M-class eruptions

A geomatic Storm Warning is in place for today. One and perhaps two CMEs are about to hit Earth. The first, hurled toward us by last Thursday's solar tsunami (C3), is expected to arrive on Aug.30. The second, ejected by Saturday's solar flare(M4.7), could come on Aug. 31-Sept 1. Neither CME is particularly bright or powerful; however, they could combine to produce G1-class geomagnetic storms.  Aurora alerts SMS Text. 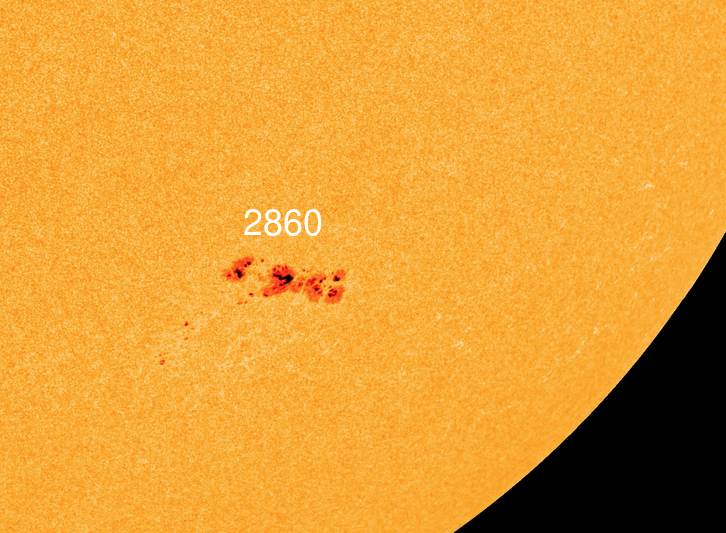 Credit SDO: Monster Sunspot AR2860 is big, and it's ready to flare...
Monster Sunspot AR2860 is big, and it's ready to flare. According to Spaceweather.com, the sunspot group has more than a dozen dark cores sprawling across 200,000 km of starscape. Currently, AR2860 is crackling with minor C-class solar flares. However, it has a "beta-gamma" magnetic field that harbors energy for stronger M-class eruptions. Solar flare alerts: SMS Text.
Our Sun has been in sunspot slumber recently but is beginning to wake up as she enters into Solar Cycle 25. Solar Cycle 25 is at its fledgling stage and is predicted to be very quiet, (a grand solar minimum). NASA has predicted Solar Cycle 25 will be the quietest solar cycle since the years 1650, to 17oo which is called the Maunder Minimum and is also known as "the mini ice age." Many experts are also predicting Solar Cycle 25, (which will last for roughly eleven years) will bring record cold and other extreme weather to the planet causing an even more difficult period for crops and agriculture, only time will tell.
NASA claimed as long ago as 1958, that changes in the solar orbit of the earth, along with alterations to the earth’s axial tilt, suggested solar activity was responsible for fluctuations in our planet's weather. In the year 2000, NASA did publish information on its Earth Observatory website about the Milankovitch Climate Theory, revealing that the planet is, in fact, changing due to extraneous factors that have absolutely nothing to do with human activity. But this information has yet to go mainstream, see the report on Earth Observatory Coincidently, Milankovitch died in 1958.

However, it's not "global warming!" The planet may well have recorded its hottest June and July ever but May was one of the coldest ever for the northern hemisphere.

This week alone, parts of South Africa Australia, and Brazil have suffered record-breaking cold and snow. The severe cold currently gripping much of the Southern Hemisphere is thought to be because low solar activity is weakening the jet streams.

Whether the solar activity is weakening, or strengthening, or causing irregularities to the jet stream, I don't know, I'm no expert but the jet streams have been acting very strange recently and are indeed responsible for most of the crazy weather our planet has been witnessing recently.

But here is the caveat, Solar Cycle 25 has so far, in its short life often been punching above its weight!

According to Spaceweather.com, a CME might sideswipe Earth's magnetic field later today. NOAA forecasters say the glancing blow could spark minor G1-class geomagnetic storms. A minor G1-class storm is nothing to worry about, however, recently our star has been anything but quiet.

NASA and ESA satellites have been observing a very unstable far side of the Sun since July the 12th with multiple CME's exploding away from the far side of our star, indicating a large explosive sunspot group could be turning toward Earth.

On July the 19th Spaceweather.com reported that the southeastern limb of the sun was seething with activity see gif below. During the late hours of July 19th, Earth-orbiting satellites detected multiple long-duration solar flares as glowing masses of plasma and magnetic arches surged into view. NASA's Solar Dynamics Observatory recorded the action:

The source of the turmoil is one or more sunspots hidden behind the limb of the sun. They won't remain hidden for long. The sun's rotation is turning the 'spots toward Earth, and we should be able to see them in the next day or two.

The eruptions of July 19th also hurled a CME into space: The storm cloud will not hit Earth. Future CMEs might, however, as the underlying blast site rotates in our direction later this week.

A few days earlier an explosion on the far side of the sun was so powerful, we could feel it here on Earth. It happened on July 13th. The debris emerged in a circular cloud known as a ‘halo CME‘:

Above: The July 13th CME imaged by SOHO coronagraphs

When space weather forecasters first saw this explosion, there was a moment of excitement. It appeared to be heading directly toward Earth. However, data from NASA’s STEREO-A spacecraft indicated otherwise. The CME was heading directly away from us–a farside event.

Now for the interesting part: Although the explosion occurred on the far side, separated from Earth by the massive body of the sun, it still peppered our planet with high-energy particles. The Energetic and Relativistic Nuclei and Electron (ERNE) detector onboard SOHO recorded a surge in radiation not long after the CME appeared.

On July the 3rd sunspot AR2838 fired off the first X-class flare of Solar Cycle 25 it was the first x-class flare recorded since September 2017 and took the experts by surprise, it had come out of the blue.

Had the two massive solar eruptions on the far side of the sun had been facing Earth this week our civilization would have been in deep trouble. According to Ben Davidson of Suspicious Observers, the massive solar eruptions were capable of causing electrical armageddon here on Earth and sending out technological world back to the stone age.

The massive CME, (coronal mass ejection, solar flare) called the Carrington Event, which happened back in 1859 was so strong it set fire to telegraph poles and buildings as well as giving telegraph operators electric shocks.

The problem for us in 2021 is we don't have the same strong and safe magnetic field protecting our planet as we did back in 1859.

Experts claim a repeat of the Carrington event frying our technological world of today would destroy our electrical-based civilization. Earth's magnetic shield is fading rapidly, we are down by about 25% in protection which is why monitoring the action of our sun is of the very utmost importance.

There would be no coming back from a massive solar flare. The chaos and panic would outway any positive organized response. As I mentioned early in this article, Solar Cycle 25 is still in its fledgling stage but solar activity is expected to 5-to-10 fold in the coming 3 years and Earth's magnetic field isn't getting stronger.