Our Star is waking up from it's long hibernation: Sunspot AR2816 erupted on April 19th, producing a strong M1-class solar flare, one of the biggest of the infant Solar Cycle 25: The powerful coronal mass ejection (CME) expected to miss Earth

According to Spaceweather this is one of the strongest flares of young Solar Cycle 25. A pulse of X-rays and ultraviolet radiation from the flare ionized the top of Earth's atmosphere, causing a shortwave radio blackout over the Pacific Ocean: blackout map. Mariners and ham radio operators in the area might have noticed unusual propagation at frequencies below ~20 MHz.

Interestingly, during the radio blackout the sun generated its own burst of radio noise. Shock waves from the solar flare rippled through the sun's atmosphere, creating plasma instabilities and natural radio emissions; NOAA reports the detection of Type II and Type IV bursts. These radio bursts may have penetrated the blackout, causing roars of static in the loudspeakers of shortwave radios at the same time that normal terrestrial signals were suppressed. Research shows that solar radio bursts can interfere with the navigation of whales.

The explosion also hurled a coronal mass ejection (CME) into space. In this SOHO coronagraph movie, watch Mercury emerge from behind the occulting disk at about the same time as the CME: 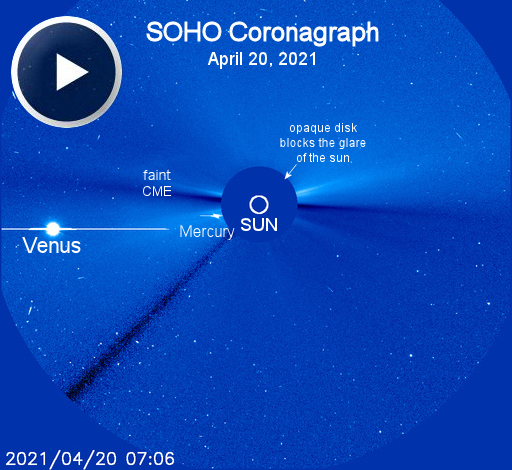 UPDATE: Using these images, NOAA analysts have modeled the CME and determined that it will not hit Earth. Auroraphiles may be disappointed, but here's some good news: With the increasing pace of solar activity, it's only a matter of time before the sun sends a CME in our direction. Stay tuned.