A new wave of the desert locust invasion currently destroying crops and pastures in northern Kenya threatening the livelihoods of millions of people threatens to spiral out of control: A square kilometre swarm can eat as much food in a day as 35,000 people. 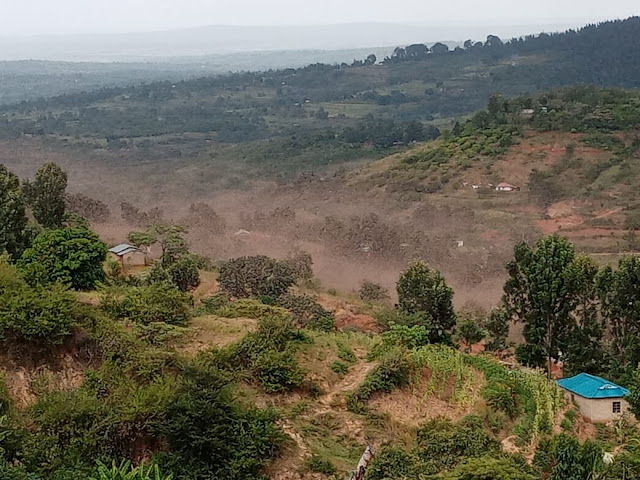 A square kilometre swarm can eat as much food in a day as 35,000 people, credit FOA.

Some were spotted in parts of the Rift Valley region, the country's breadbasket. The swarms of locusts now threaten the livelihoods of millions of people in Kenya as the conflicts in Yemen, Somalia and northern Ethiopia make it difficult for FAO to control the breeding and movement of the pests at the source. FAO attributes the upsurge of locusts to favourable breeding grounds in these countries. "We are having a second wave because of the favourable breeding weather conditions in Ethiopia and Somalia," said Hamisi Williams, assistant FAO representative in Kenya. "Yemen seems to be a gateway to the Horn of Africa because when the southerly winds begin to blow, locusts cross over the Red Sea to the Horn of Africa," said Mr Williams.

"Control measures including aerial spraying and mapping out breeding areas have been hampered by the fighting in Yemen, which is one of the largest breeding grounds of desert locusts," the FAO representative said. Swarms can fly up to 150 kilometres a day with the wind, and a single square kilometre swarm can eat as much food in a day as 35,000 people. "Intense ground and aerial control operations are in progress to reduce current swarm populations so that the scale of the upcoming breeding may be lower," said Hamadi Boga, Principal Secretary of the Department for Agriculture Research in Kenya's Ministry of Agriculture, Livestock, Fisheries and Irrigation. He said that while control operations are underway, surveys are being conducted to flash out any swarms that could be breeding in northern Kenya.

In the Horn of Africa, immature swarms continue to migrate southwards from breeding areas in eastern Ethiopia and central Somalia to southern Ethiopia and northern Kenya. FAO reports that a few immature swarms reached the Mwanga district in northeast Tanzania on January 8, 2021. In Ethiopia, immature swarms are concentrating along the eastern side of the Harar Highlands in the Oromia region as they move to southern areas of the country, including southern parts of the Rift Valley. There are also cross-border movements near Jijiga and northwest Somalia and along the southern border with Kenya.