As the 2020 Biblical record-breaking locust invasion draws to a close where the locusts remain they are turning everywhere into a desert in regions where millions already go hungry, stretching from Kenya, through Somalia, Ethiopia and Sudan across to Saudi Arabia and the Yemen 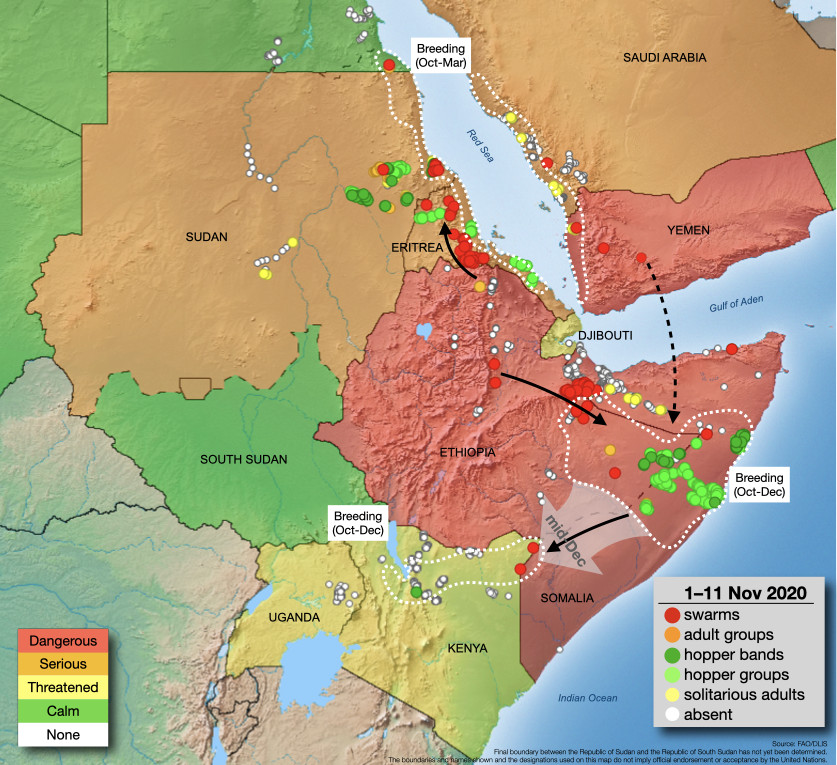 MOGADISHU (Reuters) - A rifle on his back, Mohamed Yasin tries in vain to chase away the swarm of yellow-coloured insects that have invaded his farm as his camels mill about nearby. Swarming on the outskirts of Mogadishu, Somalia, locusts are eating away at Yasin’s livelihood, destroying maize and beans and all his grass. “We have asked the government to help us on how we will fight the locusts as they are turning everywhere into a desert,” Yasin told Reuters.
The insect plague hitting Somalia is part of a once-in-a-generation succession of swarms that have swept across East Africa and the Red Sea region since late 2019, driven by unusual weather patterns. In a region where many already go hungry, The coronavirus has this year exacerbated the crisis by disrupting the supply chain of pesticides and other equipment needed to fight them off.

Important and widespread breeding continues in eastern Ethiopia and central Somalia where new swarms are expected to start forming in early December and move south to Kenya and southern Somalia by mid-December. Control operations are underway. In Somalia, immature swarms continue to be present in the northwest between Boroma and Hargeisa. In the northeast and central areas, hatching continues between Garowe and Belet Weyne were first to second instar hoppers are forming groups and bands.

In Kenya, a few early and mid-instar hopper bands are forming in Samburu county. In the northeast, more swarms have been reported near the Somalia border in Mandera and Wajir counties of which may be laying eggs. These swarms probably came from central Somalia on northerly winds that are now reaching Kenya.

In Ethiopia, a few immature swarms persist in Afar region while more immature swarms are present in the Somali region between Jijiga and Degeh Bur, some of which are maturing. In the Ogaden, second and third instar hopper bands are present between Warder and the Somalia border, and at least one swarm has laid eggs near Kebri Dehar.

A new locust swarm arrives in Argentina from Paraguay, swarms moving north into Brazil: Meanwhile, risk of swarm migration from the Horn of Africa prevails: China is the latest country infected.

In Eritrea, immature swarms that arrived from northern Ethiopia have scattered throughout the highlands to nearly the Sudan border. Hopper groups are present on the southern coast of the Red Sea between Idd and Tio and on the central plains near Sheib where some are fledging and forming groups of immature adults. Hopper groups are also present in the western lowlands.

China is the latest country to join the ever-growing list of countries being devastated by locust invasions stretching 3 continents including South America, Africa the Middle East, Arabia, Indo Pakistan, Nepal, Myanmar all struggling to control trillions of locusts.

In Sudan, hopper bands and immature adult groups are persisting between the Red Sea Hills and the Atbara River. More immature swarms have been seen in the Tokar Delta on the Red Sea coast in the past few days.

In southeast Egypt, a mature swarm was seen laying near the Red Sea coast and the Sudan border.

In Yemen, summer-bred swarms are still present in parts of the interior. On the 8th, a swarm was seen flying near Bayhan. Breeding continues on the northern coast of the Red Sea while conditions are dry along the Gulf of Aden coast.

In Saudi Arabia, a swarm was treated in the southern Asir Mountains.