The Prince of the Power of the Air has skillfully taken over our airwaves since the early 60s from innocent TV and radio and replaced it with a diet of sex, violence and magic: Homosexuality has been introduced onto our screens seamlessly and replaced rock n' roll with gun touting gangstas' spouting evil. 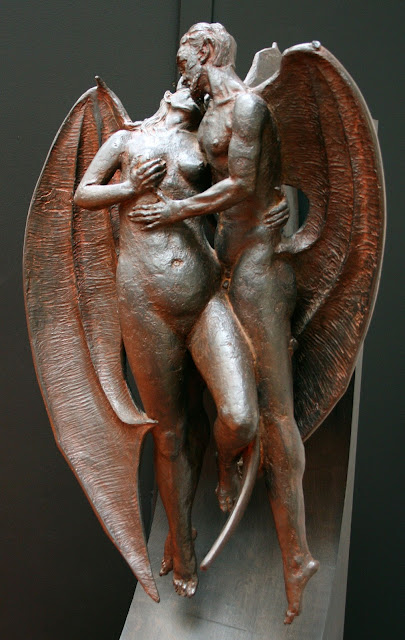 I was born back in 1956. Back then, technology was a black and white TV and a gramophone record player with an inbuilt radio. Rock n' roll was in its early stages. TV was also in its infant phase with only two channels, BBC 1 and BBC 2 which showed innocent series such as Hancock's half-hour and The Billy Cotton Band Show. Telephones were available back then but we couldn't afford one.

A year later the space race began when the Russians, much, to everyone's surprise, launched Sputnik 1 months before the Americans launched their first rocket, Explorer 1, on Jan. 31, 1958. We had entered the modern era.

Sixty-two years later, a mission to Mars is being planned and NASA has promised to return to the moon. Next year space travel is said to become available to space-tourists. We carry around a device which we can access almost every book that was ever written, almost every film or TV show and almost every radio channel. We can talk to people anywhere in the world live on facetime or Zoom and it costs nothing. However, this device is only a little bigger than the palm of your hand and fits easily in our pocket.

Back home we have flatscreen high definition televisions in most rooms. These TV's have hundreds of channels, however, if that is not enough we also have Netflix which allows us to access hundreds more movies and series. Even more gadgets, laptops, tablets and PC's allows us to stream or download thousands more TV shows, films and videos. Pornography and violence are readily available and is pushed into our faces 24/7.

But how could this have happened in such a short time?

Contrary to what we are told when we are young, the devil does not reign down below in hell, that is his deception, he wants us to believe he is below under the ground in his place of eternal flame but he is not, he is in fact in the ether, in the air. He is actually among us and is called the Prince of the Power of the Air.

The following is an excerpt from Ephesians 2.

And you were dead in your trespasses and sins, in which you formerly walked according to the course of this world, according to the prince of the power of the air, (the devil) of the spirit that is now working in the sons of disobedience.

And again in Ephesians 6.

In just 60 years the devil has cleverly outsmarted our society and replaced the innocence of Hancock's half-hour and The Billy Cotton Band Show with a diet of sex, violence and magic. Rock n' roll has been replaced by foul-mouthed rappers singing about rape and murder. Homosexuality has been introduced onto our screens seamlessly, music and dance videos are often deemed pornographic as young girls gyrate and dance to music in an obscene way.

5G the next level

We are on the verge of increasing his power, 5G will bring him into the next level.

Video games are teaching kids and adults to be killers. I ask you to take a look at your Facebook or Twitter feed recently and see just how much hate is some of those posts or videos, the anger and hate is astonishing. Much of the hate and violence is now spreading onto the streets. Civil unrest is boiling overall around the world as our planet is clearly reeling from the violence we are witnessing every day. And the nasty covid-19, which is itself air born is the devil behind that too? Why not, he wants us all dead so, why not!

The power of the devil

What has happened in the US this year in the first ten months of 2020 is nothing short of astonishing, they have gone from being the world number one superpower to laughing stock in less than a year! Other countries will follow, the UK, France, Spain and Germany have all seen civil unrest this year, even Russia and China have seen civil decent, no country will escape.

2020 has been a terrible year and many believe, I included, the terrible times will intensify as we approach the tribulation period. If there was ever a time for you to get yourself close to the love of Jesus it is now. Stay safe folks.

Thank you Gary for sharing the fact that Jesus is the Only Way to eternal salvation. satan knows his time is short and that's why the evil is increasing so quickly. But Jesus has overcome, He has already won the war. He truly is the one anly Son of God.

well said Gary - anyone who cannot see at this point that the battle is not with left vs right, men vs women, black vs white is willfully ignorant, brain dead or complicit - we are headed for interesting times and people really have to put the full amour of GOD on.Repent of your sins and ask Jesus into your life..to save your eternal future.Naturally this was all planned a long time ago..
Blessings to you and your family - buckle up

Thank you for revealing satans lie for all to see.

Everything in this video exposes his tactics well.

The memories of my past keep surfacing and it feels as if wheelbarrows of garbage is being dumped over me.

I am a seasoned follower of Jesus Christ and a warrior.

I needed to hear as a reminder to what has been spoken in this video. My conclusion....I am worth for ministry. We all get weary and tired and this video has encouraged me and reminded me what He brought me through and the call on my life. It is by the blood of the lamb and the word of my testimony that others will be saved.

Our fight is not with flesh and blood. The enemy is an invisible foe, he works his evil in the mind and I should have known better than to fall for lies.

I have the same feeling of garbage being dumped on me too Anonymous, thank you and stay safe!

I love all the comments from true believers in Jesus Christ, the signs of hate & darkness is here, no where to hide & bury your head in the sand, find the savior Jesus Christ & be at ease b/c he is coming for us soon. My final destination was never here, my future is serving the true Almighty God & Jesus Christ forever. I love everybody, God bless. Amen.

The misspelling, grammatical and syntactic errors in this headline are just incredulous! They do not lend credence to the author's intelligence. If you want to be believed, you will better serve this goal by using correct English, particularly in the headline, where you want to draw a reader in to check out the full article. The word I think you mean in your headline is "stealthfully", and the verb in that sentence should be "taken" (not 'took'), and the gangstas should be cited as gun-toting (this adjectives requires a hyphen), not "gun touting", which means something else entirely. Just sayin' I did not want to finish the entire piece lest it be wrought with even more Composition 101 offenses. And I wasn't even an English major.............studied 4 other languages at university however.

You have no sound doctrine w/ those comments Buttoni, knowing correct english composition will not save you & make you above other humans, your good deeds, good works will not save you, they will be dirty rags to God, the bible is the word of the Almighty God. Jesus is the truth, the way, & the life. Amen. God bless all of us.