1950s saw an incredible burst of major quakes, (mag 6 or higher) peaking in 1957 the year true global warming began when our Sun went ballistic with a record-breaking number of Sunspots and the year the Space Race started! We maybe due for another massive increase? 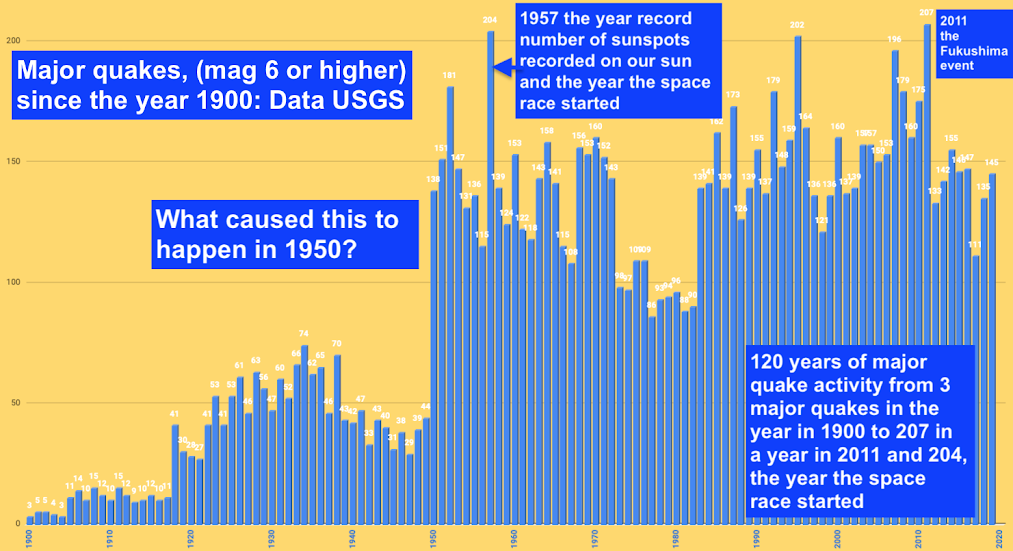 Please click on the chart to enlarge. The chart is free to use please credit The Big Wobble, thank you.
The chart above is composed by Gary Walton with data drawn from the United States Geological Survey, (USGS) going back from 2019 to 1900. We have long known that major quakes (mag 6 or higher) have been increasing for a very long time, however, when the raw data is broken down and applied to a graph we can better annalise what is really happening.
We can clearly see from 1900 the world recorded an average of around 9 major quakes per year until 1918, the year the first world war ended when the world suddenly saw a tremendous increase in major quakes as 41 were recorded. The major quakes carried on increasing at a pace and peaked at 74 around 1935 before dropping off to 29 around the end of the second world war.
Then something remarkable happened from 44 major quakes recorded in 1949, the 1950 total shot to 138. Two years later the yearly number had shot up to 181 and in 1957, the year the space race began and the same year our Sun went ballistic with a record-breaking number of Sunspots full story here that number peaked at 204, the second-highest number of major quakes, (mag 6 or higher) ever recorded, coincidence?
A steady decline happened after 1957, just as the 1920 to 1949 period had dropped earlier in the century before the explosive rise in 1950. However, we witnessed another massive jump in 1982, after 88 and 90 major quakes had been recorded in 1980 and 1981 respectively, a huge spike of 139 major quakes were recorded in 1982, which went on to peak in 2011 when 207 major quakes were recorded, the most ever in a one year period, more than 70 of them recorded at the magnitude 9.0 earthquake as fore and aftershocks in the Pacific Ocean off the northeast coast of the Tōhoku region of Japan's Honshu island on March 11, 2011. The Great East Japan Earthquake.
If the chart continues to follow previous years we could be in for a bumpy ride because the number of major quakes recorded since the 2011 record has been in steady decline following past peaks and declining, however, the decline is always followed by an explosive sudden rise, that, as far as I can see will not happen in 2020 but 2021 could just be the year... Stay tuned folks.
Major Quakes 2020