When Two forces collide! US squeezed in fire and cyclone sandwich: Tropical depression Twenty to strengthen into a “powerful hurricane”: Hurricane Sally is producing an extremely dangerous life-threatening storm surge: Hurricane Paulette bore down on Bermuda on Sunday 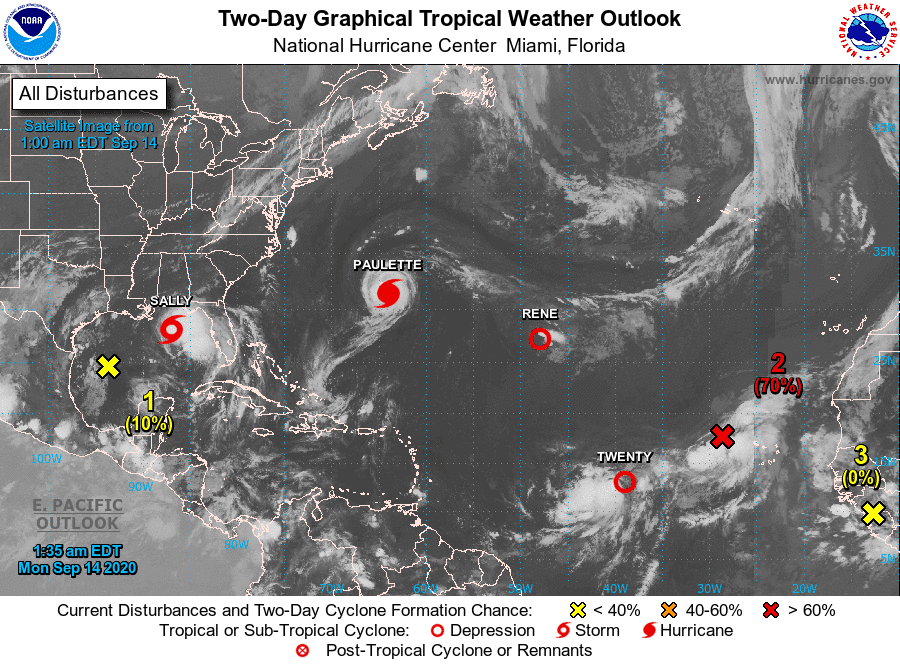 It is that time of the year again folks, wildfires in the west from heat drought and winds and hurricanes in the east created by warming oceans feeding swirling wind depressions. As we might now come to expect 2020 could smash previous records on both the Atlantic and Pacific coasts this year.

A satellite image from NOAA above is showing a list of storms emerging in the Atlantic which would not look out of place in the blockbuster movie, The Day After Tomorrow.

Tropical depression Twenty is forecast to strengthen into a “powerful hurricane” over the central Atlantic by the latter part of the week, U.S. National Hurricane Center (NHC) said on Sunday. The system is located about 1,025 miles (1,645 kilometres) west of Cape Verde Islands, packing maximum winds of 35 miles per hour (55 km/h), and is moving west-northwest, the NHC said.
Gaining strength in the Atlantic Ocean, Hurricane Paulette bore down on Bermuda on Sunday with its core expected to pass over the island beginning early Monday morning, according to the latest advisory from the U.S. National Hurricane Center (NHC). Paulette, a category one hurricane, is located about 155 miles (249 km) southeast of Bermuda and approaching at a speed of 14 miles per hour (23 km/h), according to the Miami-based centre. The hurricane’s maximum sustained winds increased to 85 miles per hour (137 kph) late on Sunday and are expected to strengthen further.
Tropical Storm Sally is producing an extremely dangerous and life-threatening storm surge over Lousiana, including the city of New Orleans, Alabahma and Florida coastline. Hurricane conditions are expected in the Gulf later today.
Tropical Depression Rene is heading on a northwest course and is not considered a threat as yet.
Hurricanes and Cyclones 2020
Front Page Headlines