"It's an absolute astonishing stranding!" The whale stranding on the Tasmanian coast is now the largest recorded in the state's history, authorities say as another 200 whales were discovered on Wednesday leaving almost 500 pilot whales stranded. A third have died so far 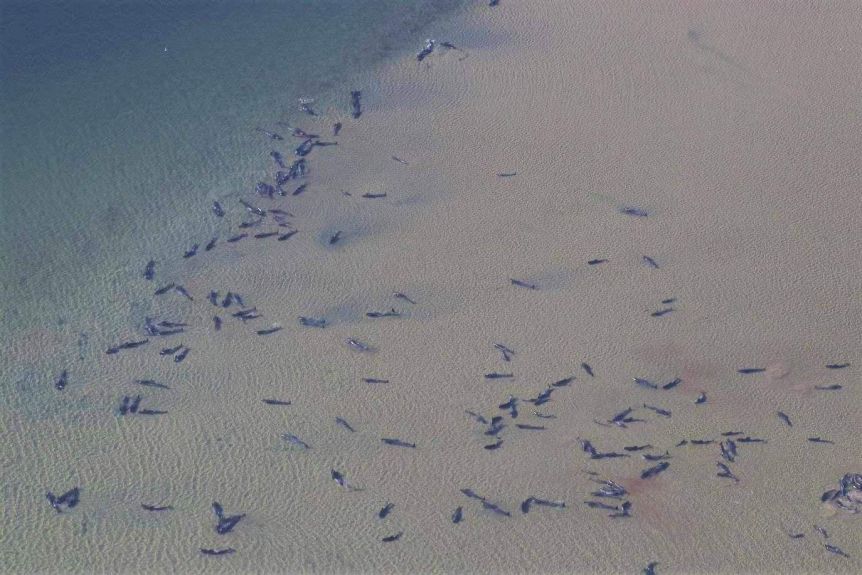 How all the whale carcasses will be dealt with is still being considered. (ABC News: Cameron Atkins)
The whale stranding on the Tasmanian coast is now the largest recorded in the state's history, authorities say as another 200 whales were discovered on Wednesday leaving almost 500 pilot whales stranded. I must say in my 12 years of reporting mass whale strandings I have never reported any total anywhere near this number, it is an absolute astonishing stranding!
With time running out to save them, attention will soon turn to removal and disposal About 270 whales were discovered in Macquarie Harbour on Monday, with a further 200 found this morning. Rescuers say it appears most of the whales discovered this morning, about 7 to 10 kilometres south of the original rescue site near Strahan, have already died. Parks and Wildlife regional manager Nic Deka said they were found during an aerial reconnaissance to check how many whales were still alive.
"Certainly from the air they didn't look to be in a condition that would warrant rescue, most of them appeared to be dead, but we'll wait on advice from the ground crew before we make a final call on what we do," he said. "If they can be saved we probably will send crews over there to do that." Mr Deka said there were several reasons why the new pod was not spotted earlier, including the distance from the other site. "Another is that in that part of the harbour, the water is a very dark tannin colour, so we think potentially they stranded, washed back into the water and then have been washed back into the bay," he said. ABC
What is causing the whales to beach themselves?
It is a theory The Big Wobble has been banding around for many years now, Solar storms may trigger whale strandings as well as dolphins, birds and bees and other animals who rely upon our magnetic field to navigate. A new study by the International Journal of Astrobiology appears to agree with The Big Wobble, releasing a report claiming; "Solar storms may trigger sperm whale strandings: explanation approaches for multiple strandings in the North Sea in 2016."
The report by the International Journal of Astrobiology claims large solar storms, may have played a role in the strandings of 29 sperm whales in the North Sea early in 2016.
The study says these geomagnetic disruptions may have confused the whales' ability to navigate, diverting them into the shallow waters. Trapped and lost, the whales died on European beaches, attempting to escape. The International Journal of Astrobiology claims large solar storms, may have played a role.

Every year an untold number of whales and dolphins wash up on beaches around the world and die, baffling experts. Birds and even bees are also known to show up dead hundreds of miles away from where they should be. Domestic animals and people are also known to be affected by solar storms. The Big Wobble has received reports from Alaska from friends who suffer from migraines and other side effects, such as seizures, when Solar storms hit the earth. They have also noted that dogs are having seizures at the same time as people are. Jenna White and Bill Laughing-Bear have written a report for The Clarion Peninsula: Voices of the Peninsula: A connection between planetary alignment, solar activity, and TBI (Traumatic Brain Injury) explaining space weather caused people with TBI to suffer "Bad Brain Days," some ending up with seizures and others taken to the hospital.

Surely with all the technology and data available to the experts, it is time to delve deeper into space weather and the effects it has on Earth, it has long been thought by some experts that not only does Coronal holes and CME's affect our species here on Earth but they also influence major quakes and volcanic activity.