In case you missed it incredible amounts of rainfall has affected untold millions of people, displaced hundreds of thousands and killed hundreds after torrential rainfall around the world in June and early July 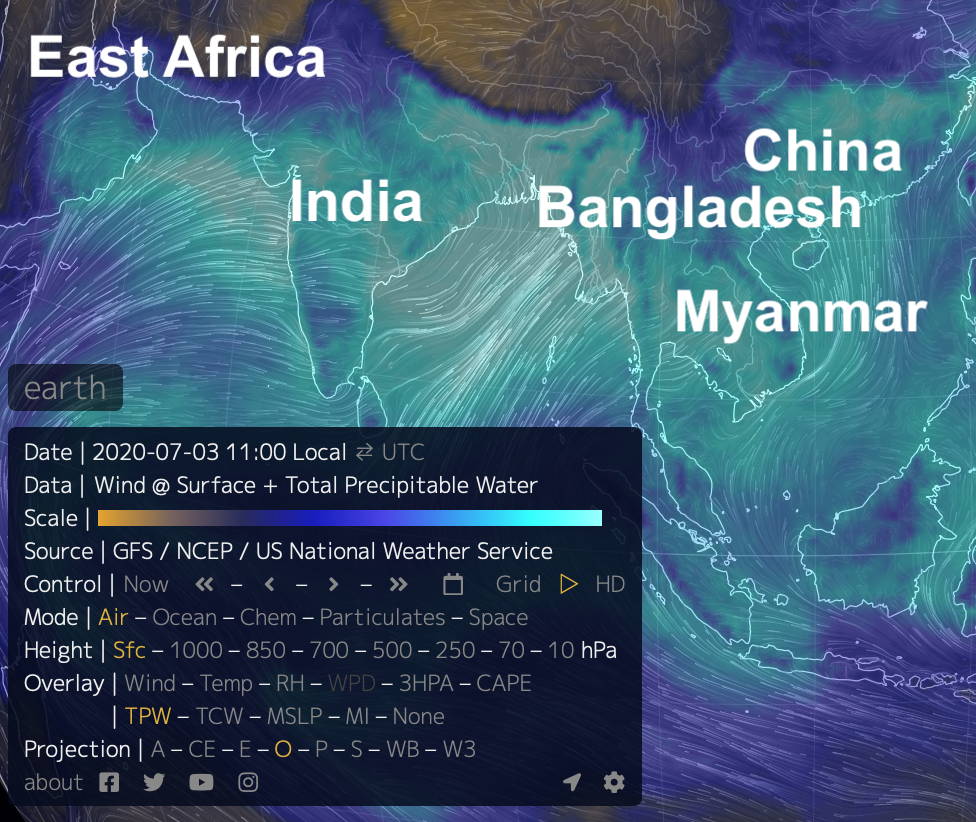 Incredible amounts of rainfall being dumped on nations being affected by locusts swarms, credit, Earthwindmap.

While the world's attention focuses on Covid-19 and Black Lives Matter, June and early July has affected  untold millions of people, displaced hundreds of thousands and killed hundreds after torrential rainfall around the world

Torrential rains in the Yangtze river basin coupled with the release billions of tons of floodwater from the massive Three Gorges hydroelectric dam upstream have left major cities along the river submerged after record rainfall. Heavy rains in the Yangtze region have left at least a 100 people dead since May with more than 14 million people affected by the floods and decimating Chinese agriculture. Meanwhile, At least 3 people have died in flash flooding in Yunnan Province, southwest China. Heavy rain from 29 June caused flash flooding in the city of Zhaotong and the counties of Zhenxiong, Yiliang, Weixin and Yanjin. Rainfall of over 225 mm in 24 hours was reported in the area. According to local news reports, 33,380 people were affected and 8 homes damaged or destroyed. The damage was also caused to the power supply, transport and telecommunications, along with over 3,500 hectares of crops.

The flood situation continues in the state of Assam, northeast India, where disaster authorities say more than 1.4 million people are now affected. Rivers have been overflowing in the state since 20 June in the current spate of flooding. Since then 1.49 million people in 2,235 villages across 23 districts have been affected. Barpeta is still the worst-hit district, with 486,709 now people affected, an increase from 135,415 on 2 days earlier. Areas of South Salmara district have recently flooded, with 195,312 people affected. Other hard-hit areas include Dhemaji, Nalbari, Morigaon and Goalpara districts, all with between 70,000 and 100,000 residents affected.

The Flood Forecasting and Warning Centre (FFWC) in Bangladesh reports that rivers are above danger levels in 14 locations across the country, as of 30 June 2020. Seven locations are at warning level. Local media report thousands of people in Jamalpur, Kurigram and Gaibandha districts are marooned or displaced, with their homes and land submerged. According to the Dhaka Tribune, over 100,000 people in Jamalpur district have been marooned after floodwaters surrounded their homes. Over 150,000 of people in Kurigram have been affected by flooding, with wide areas of crops underwater. As of 30 June, FFWC reports that that the Brahmaputra river at Noonkhawa in Kurigram stood at 27.14 metres, above the danger mark of 26.5 metres and the Dharla in Kurigram stood at 27.46 metres, where danger levels are 26.5 metres.

At least nine people died after a cyclone swept through parts of southern Brazil on 30 June. Winds of over 120 km/h were reported in the state of Santa Catarina. The states of Rio Grande do Sul and Paraná were also badly affected. The wild weather has also brought the threat of flooding. Storm surge has prompted warnings for coastal flooding in Santa Catarina. In the Rio Grande do Sul, river levels are above flood stage in some areas of after the storm brought rainfall of over 140mm in 24 hours.

It's the same story in Japan too as late last week as Nagasaki suffered a once in 50-year rainfall event which devastated the area.

After Romania has suffered its worse drought in a hundred years, record rainfall the highest in 200 years fell on the European country last Wednesday. Three people died when the torrential rain caused flash flooding in many counties.

At least 5 people have died and one is missing after flash flooding in the Abidjan District, Cote D’Ivoire (Ivory Coast), on 25 June 2020 after 240mm of rain fell in a few hours. More heavy rain has fallen since with conditions set to worsen.

Britain suffered its wettest June day ever yesterday as 10 weeks of rain fell in less than 24 hours with the nation facing 50mph winds amid warnings of floods and power cuts while temperature falls to 66F, 19 deg C.

About 400 people were evacuated from their homes in southeastern Poland after flooding that began 27 June. Poland’s Institute of Meteorology and Water Management reported Jasło in Podkarpackie Voivodeship (province) recorded 100.4 mm of rain in 5 hours on 27 June. Wide areas of neighbouring western Ukraine suffered flooding last week. Prime Minister of Ukraine, Denys Shmyhal, said on 28 June that 7,500 homes have been flooded across 250 settlements in five oblasts of Ivano-Frankivsk, Chernivtsi, Zakarpattia, Ternopil and Lviv, according to Floodlist.

In South America, heavy rain fell between 22 and 24 June, with dozens of locations recording more than 65mm of rainfall in a 24 hour period. According to Uruguayan Institute of Meteorology (Inumet), in 24 hours to 23 June, the town of José Batlle y Ordóñez in Lavalleja Department recorded 105 mm of rain and San José de Carrasco in Canelones 88 mm. The following day Coronilla in Maldonado recorded 82.3 mm of rain and Minas in Lavalleja 75.0 mm, according to Floodlist.