Christianity is now the latest victim of hate, targeted by George Floyd, BLM and Antifa vandals across the US: Almost 250 million Christians live in countries where they experience high levels of persecution around the world 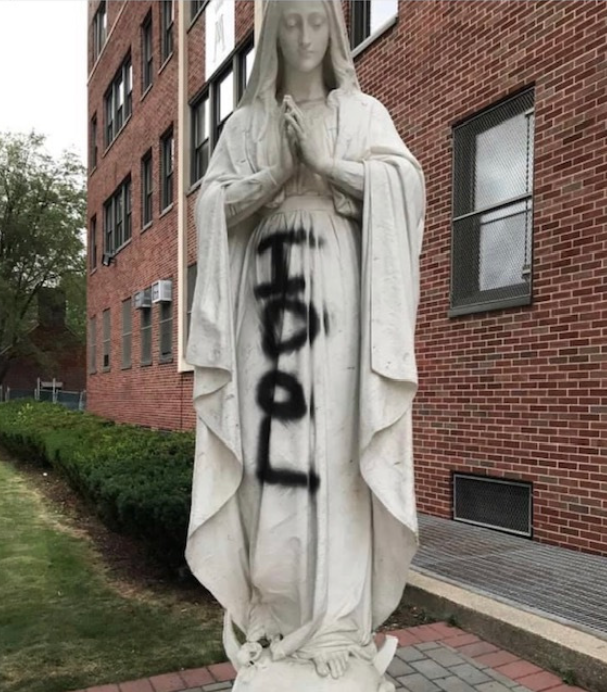 Christianity is now the latest victim of hate, targeted by George Floyd, BLM and Antifa vandals across the US as the world's most powerful nation reals, crippled with hatred, ugliness, viciousness and nastiness, fuelled by a political quagmire of backbiting, lying, corruption, disloyalty and cheating. Statue wars have come to Christianity, statues of Jesus have been vandalised and churches defaced with sick satanic and antichrist symbols across the US as the vandals turn their hate to religion. Multiple churches have been ‘burned and vandalized’ across the US as cops investigate possible links to statue protests. Houses of worship are being burned after George Floyd's police custody death in Minneapolis on May 25, which sparked widespread outrage and anti-racism rallies. Black Lives Matter activist Shaun King urged demonstrators to "tear" down Jesus Christ statues and murals because he said they are "a form of white supremacy" on Twitter. Full story

The country is riddled with racism, crime, inequality and poverty. The Covid-19 virus has attacked the US like no other country and has left many people asking is the virus spiritual as well as physical?

In Russia being a Jehovah's Witness is now a crime. Not wanting to be exposed by law enforcement agencies, the "suspects" (Jehovah's Witnesses) are being rounded up and imprisoned for hiding activities, (Bible meetings and Bible studies, storing reporting and other documentation in electronic form, (Watchtower magazines and Bile text) organized groups and used video conferencing for collective meetings (payer and study meetings). All building belonging to the Witnesses (Kingdom Halls) in Russia have been annexed by the government.

Yevgeniy Spirin, a Jehovah's Witness is facing a 7-year jail sentence for organizing the activities of an “extremist” organization, (Bible meetings).

Dennis Christensen, a Danish national living in Russia, was arrested in 2017 and prosecuted for peacefully exercising his right to freedom of religion. In February 2019, Dennis Christensen was sentenced to six years in a penal colony for “organizing the activities of an extremist organization.” Being a Jehovah's Witness. Full story

As China experienced an explosion in the number of religious believers, the government has grown wary of Christianity and Islam in particular, with their overseas links. In Xinjiang, a surveillance and internment system has been built for Muslim minorities, notably the Uighurs. Xi has called for the country to guard against “infiltration” through religion and extremist ideology.

Over the past year, local governments have shut hundreds of unofficial congregations or “house churches” that operate outside the government-approved church network. A statement signed by 500 house church leaders in November says authorities have removed crosses from buildings, forced churches to hang the Chinese flag and sing patriotic songs, and barred minors from attending. Churchgoers say the situation will get worse as the campaign reaches more of the country. Another church in Chengdu was placed under investigation last week. Less than a week after the mass arrest of Early Rain members, police raided a children’s Sunday school at a church in Guangzhou. Officials have also banned the 1,500-member Zion church in Beijing after its pastor refused to install CCTV.  Full story

In North Korea, the Constitution guarantees "freedom of religious beliefs". However, in reality, there is no freedom of religion in the country. According to one report at least 200,000 Christians have gone missing since 1953. Christians in North Korea are said to be the most persecuted in the world. The Democratic People's Republic of Korea is officially an atheist state, but government policy continues to interfere with the individual's ability to choose and to manifest a religious belief. The regime continues to repress the religious activities of unauthorized religious groups. Recent refugee, defector, missionary, and nongovernmental organizations (NGO) reports indicate that religious persons engaging in proselytizing in the country, those who have ties to overseas evangelical groups operating across the border in the People's Republic of China, and specifically, those repatriated from China and found to have been in contact with foreigners or missionaries, have been arrested and subjected to harsh penalties. People found with Christian Bibles, which are considered to be a symbol of the West, can be executed or tortured. Refugees and defectors continued to allege that they witnessed the arrests and execution of members of underground Christian churches by the regime in prior years. Full story

Religious persecution — particularly against Christians — is at an all-time high. More than 245 million Christians live in countries where they experience high levels of persecution, according to Open Doors. But there are a few countries where the level of harassment and hostility is so intense that they’re classified as places of extreme persecution. One of these places is Iran. Few people are talking about the fact that Iran is one of the worst persecutors of Christians in the world. Open Doors has listed Iran in its top 10 most dangerous countries for Christians for nearly a decade.

Being a Christian in Iran automatically puts a person’s life at risk, but it’s particularly dangerous for Iranians who have converted from Islam to Christianity. They have to live their faith secretly, pretending they are faithful Muslims when in reality they are Christians. These believers cannot go to one of the few churches the Iranian government has given limited permission to operate; they cannot hold services in Persian; they have to meet in secret to avoid attracting authorities. Since the Islamic Revolution in 1979, Iran has catalogued Christianity as an existential threat to the nation. In fact, the Iranian regime fears Christianity so much that Iran’s intelligence minister, Mahmoud Avali, recently expressed concern over Iranians who are becoming Christians. Full story

To be a Christian in Afghanistan is in all sense and purpose of a death sentence. The country does not permit any faith other than Islam to exist and is illegal to convert. To convert to a faith outside Islam is tantamount to treason because it’s seen as a betrayal of family, tribe and country.

Somalia is dominated by a major Islamic extremist group known as al-Shabaab, and the lack of law and order means Somalia is a safe haven for its members. Al-Shabaab actually hunts Christians down to execute them. “In areas not under al-Shabaab control, Christians still risk being killed by family members,” states the World Watch List. Full story

You do know Jehovah Witnesses are a cult who believe Jesus is a god but not Almighty God and who was Michael the archangel before he became Jesus.

Seems to me Christians need to defend themselves or else this will become worldwide. The enemy was kicked out of heaven after a war so we know if the angels defend heaven against evil so should Christians. It's time to defend oneself and one's family when evil seeks to take over - it's the just the way it is. Heck even Jesus is coming back to kick some butt because of the evil so why do Christians think they should be just carted off to penal colonies for exercising their God-given rights? Time to let the evil know they have a fight on their hands when doing their evil - resist satan and he will flee because he has nothing but deception and confusion to offer anyone.

American Christians need to differentiate between nice and good. Jesus was NOT nice, but He was good. Nice is a euphemism for, kick me, and kick me again. The good will get kicked only once, then the gloves are off for the next kick. Like it or not, if Christianity is going to survive we have to stop being nice to those who would destroy us. Fight back!

The Abrahamic religions have been fighting over how to worship the same evil false god for centuries.
Nothing new here.

Real (!) followers of Christ are persecuted everywhere. Narcissists hate them and also (the) many name-christians/name-catholics are narcissistic.
A slave is not above his Lord

I wonder if the desecration of sacred images is part of jihad in
America.

This should be an eye opener for any non belivers in Christ.
It has been said there was a Big Bang and the Universe is billions of years old, thats a long time. So what incredible event took place a mere 2000 or so years ago that reset the billion year clock?
Jesus Christ predicted His death and Resurrection and pulled it off, with witnesses.
Everyone is entitled to their own beliefs but don't get caught denying the historical facts that took place.
Jesus is Lord and there is no other!

LMAO... Actually, they do represent "White Supremacy, because He was not white, or whatever color Esau/Edom's descendants are today. But, if you were really as smart as you think you are, you would already know that, right ? Once Yah turned his head away from his chosen 'The Shemites", and toward the other nations, Esau/Edom's supremacy began. Call it any name you like. So, AA can't be anti-self, because we are Shemites. Get it ? I have already traced my DNA back to the Natufian Culture (The Levant). And, I don't look anything like the Semites. Fascinating thing, that DNA structure. That is why, Paternal lineage is passed from father to son, as stated in scripture. The Most High knew the Revelation 2:9ers, would use deception to mask the truth.

Christians need to stop being pansies and whine about being "persecuted". We live in a free country with a right to bear arms and defend ourselves.

"I have given you the authority to TRAMPLE on snakes and scorpions and to overcome the power of the enemy; nothing will harm you."
Luke 10:19

Guess we need to start carrying AR-15's & M1A's instead of the usual handguns to church now.

A statue of Mary IS an idol, a violation of the 10 commandments.

To Dov Sar, then do not worship the statue, worship the True God of the bible. Love is the word. Melly. God Bless. Amen.