Seismic signs and wonders: A magnitude 6.4 earthquake rocks China just 30km from its Indian border, days after astonishing fistfight between troops: Is a phenomenon known as a "pulsation continuous" the cause of the recent quake uptick? 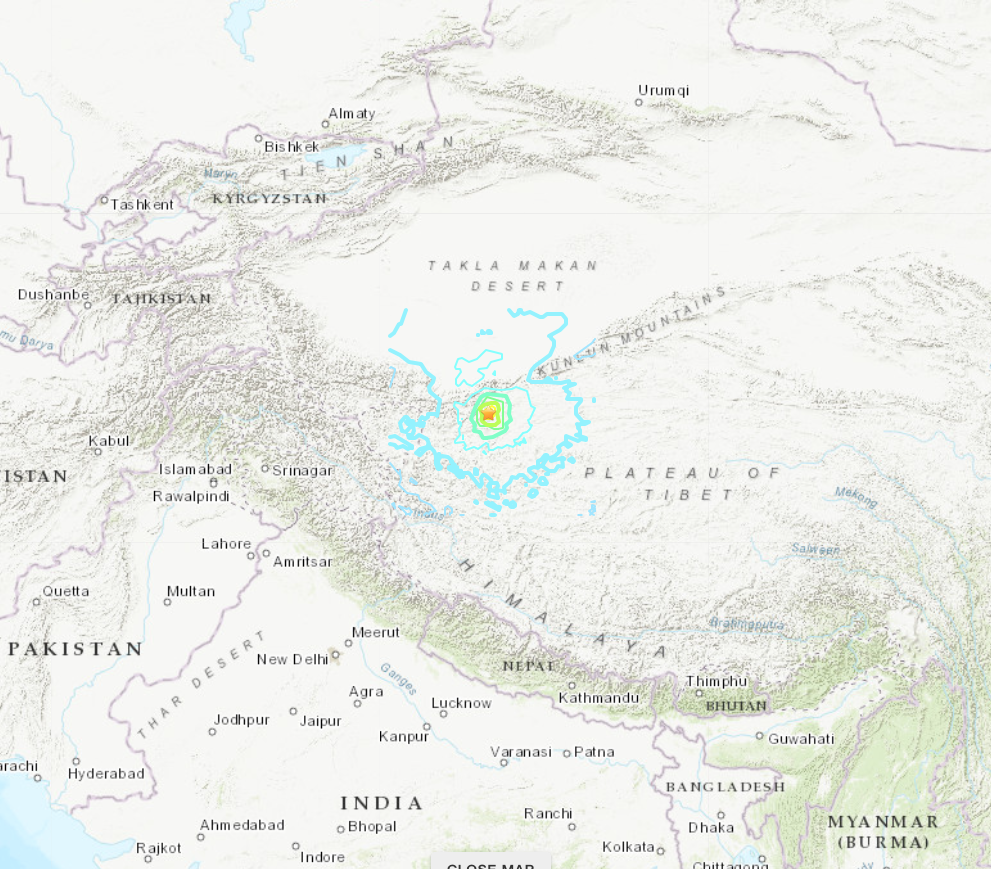 A magnitude 6.4 earthquake has struck China just 30km from its Indian border just 10 days after 70 Chinese and Indian soldiers were killed in a fistfight which could have sparked a nuclear war engulfing the world

The fistfight erupted ten days ago on a narrow Himalayan ridge border area between Indian and Chinese soldiers which ended in the deaths of 50 Chinese and 20 Indian soldiers. The two countries have blamed each other for the conflict of course. TBW

Yesterday's major quake (mag 6 or higher) is the second major quake to hit the world since June the 23rd, however,  our government-run agencies have a way of cooking the books, the last week has been a week with very much seismic action. An earthquake of magnitude 6.1 struck 23 km (14.29 miles) west-northwest of Cartago in California on yesterday, however, the U.S. Geological Survey has since reduced the quake to a magnitude 5.8.  The quake was at a depth of 9 km, it added. the area received 170, small to medium aftershocks according to USGS.
A magnitude 6.0 earthquake, reduced to a 5.9 by USGS, rattled Milford Sound, in the tourist hotspot of Fiordland in New Zealand’s South Island on Thursday, government seismic monitor Geonet said. Thousands of people in the area registered as having felt the earthquake, which was very shallow at a depth of 5km (3 miles), but there were no immediate reports of damage or injuries. On Monday a magnitude 6 earthquake rattled Iceland.

As we approach the halfway point of 2020, a total of 53 major quakes (mag 6 or higher) have been recorded around the world with 9 recorded in June so far, USGS is keeping things tight.

All the above quakes happened on or around the 23rd of June which could be very significant because, on that day, a global magnetic anomaly was recorded here on earth. A phenomenon known as a "pulsation continuous" or "Pc" for short was recorded by astronomers around the world. Pc waves are essential flutters propagating down the flanks of Earth's magnetosphere excited by the breath of the sun. During more active phases of the solar cycle, these flutters are easily lost in the noise of rambunctious geomagnetic activity. But during the extreme quiet of Solar Minimum, such waves can make themselves "heard" like a pin dropping in a silent room. In the Lofoten islands of Norway, Rob Stammes detected the anomaly on his magnetometer. "It was remarkable,” says Stammes. "Our magnetic field swung back and forth by about 1/3rd of a degree. I also detected ground currents with the same 10 minute period." It has long been known that solar energy affecting our magnetosphere causes seismic activity here on earth, maybe the "pulsation continuous" is the cause for all the above seismic activity during the same period. Full Story