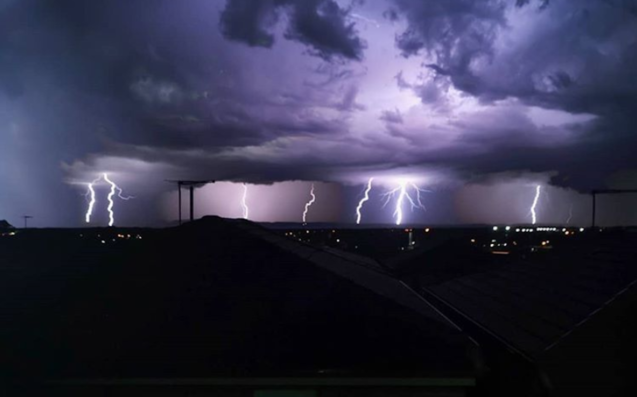 Severe thunderstorms ripped across New South Wales overnight, with thousands of lightning bolts cracking across the sky and hail pelting parts of Sydney's west. A 37-year-old man died after he was struck by a gas bottle in Sydney's CBD.

Ausgrid reported "widespread power outages and damage" in Sydney and warned people to stay at least eight metres away from any fallen powerlines. Damaging winds of up to 101 kilometres per hour were recorded at Richmond, while 12 millimetres of rain fell over Orange in just 10 minutes.

Hailstones the size of golf balls also fell near Mittagong and Wollongong. A severe thunderstorm warning was still in place at 1:29am on Wednesday for people in the Hunter and parts of Mid North Coast, Central Tablelands, North West Slopes and Plains, Central West Slopes and Plains and Northern Tablelands forecast districts. Residents in Greater Newcastle and parts of Maitland/Cessnock areas were also warned at 1:31am to expect damaging winds, heavy rainfall and large hailstones. But as the thunderstorms were fast-moving, rainfall totals were quite low across the state.

Earlier on Tuesday, around 2pm, the weather bureau issued a severe weather warning as dangerous storms were detected in the Melbourn's north, moving through the south-east. Moorabbin Airport saw around 13mm of rain in just three minutes as the storm passed through. By 4pm, flooding was reported in areas including near Cranbourne West Primary School and on the Princes Highway at the major thoroughfare of Springvale Rd in Mulgrave.

Sydney storm: Thunder and lightning thrash Australian city Thunderstorms have battered Sydney, with over 60,000 lightning strikes in the region. Paul Davies filmed the storm as his plane came into land.

Climate engineering using electrically conductive aerosol injections into our atmosphere can be a good reason for this.

These aerosol injections are being used to improve military communication but is also used for weather modification (which is still being denied despite incremental admissions of 'field tests' and ongoing preparation of the public by slow media release of the concept).