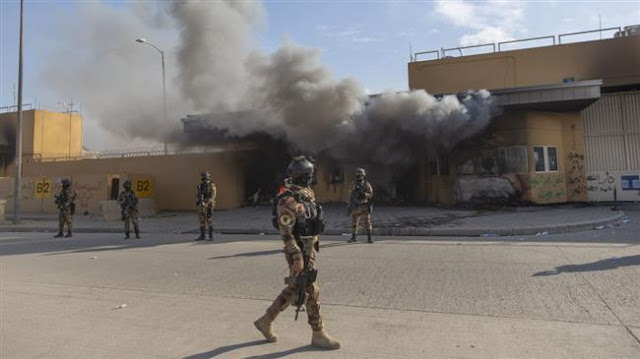 File photo of Iraq troops deployed in front of the US embassy in Baghdad. PressTV

At least three rockets struck the US embassy in the Iraqi capital, Baghdad, on Sunday. One rocket hit the embassy cafeteria while two others landed a short distance away, a source told AFP. At least three people were injured, security sources told Reuters. This would be the first time in years that staff have been hurt in such attacks. No group has claimed responsibility but the US has blamed Iran-backed military factions in Iraq in the past. Iraqi Prime Minister Adel Abdul Mahdi condemned the attack, stating that the continuation of such acts could "drag Iraq into becoming a battlefield". What is the future of US troops in Iraq? Moqtada al-Sadr: The firebrand cleric who could calm Iraq Soleimani attack: What does international law say? The US State Department said: "We call on the Government of Iraq to fulfil its obligations to protect our diplomatic facilities." Recent attacks have targeted the embassy or Iraqi military bases where American troops are deployed. Iraq has been dragged into a rapid deterioration in relations between Iran and the US in recent months. BBC

The American embassy in Baghdad, the world's largest, lies within the fortified neighbourhood, also known as the International Zone, which is surrounded by concrete walls. The development came two days after nearly a million Iraqis took part in a huge march in the streets of Baghdad to demand immediate withdrawal of all US forces from the country. The massive rally came after influential cleric Moqtada al-Sadr called on Iraqis to stage "a million-strong, peaceful, unified demonstration to condemn the American presence and its violations." Also on Friday, a senior official of Iraq’s Popular Mobilization Units (PMU) issued a statement warning the US president to voluntarily order the withdrawal of US troops from the country before being forced out. PressTV

Something doesn’t sound right here when they have the technology to shoot down any incoming rockets and they got hit by three rockets, without notice very convenient this, only justifies their reasoning to respond when USA they shouldn’t even be there in the first place, nobody invited America into Iraq in the first place, get out and sort out your own problems in America with the homeless population in the streets, sort that out first before you worry about anybody else’s problems!!!!

I don't think the US wories about somebody else's problems...