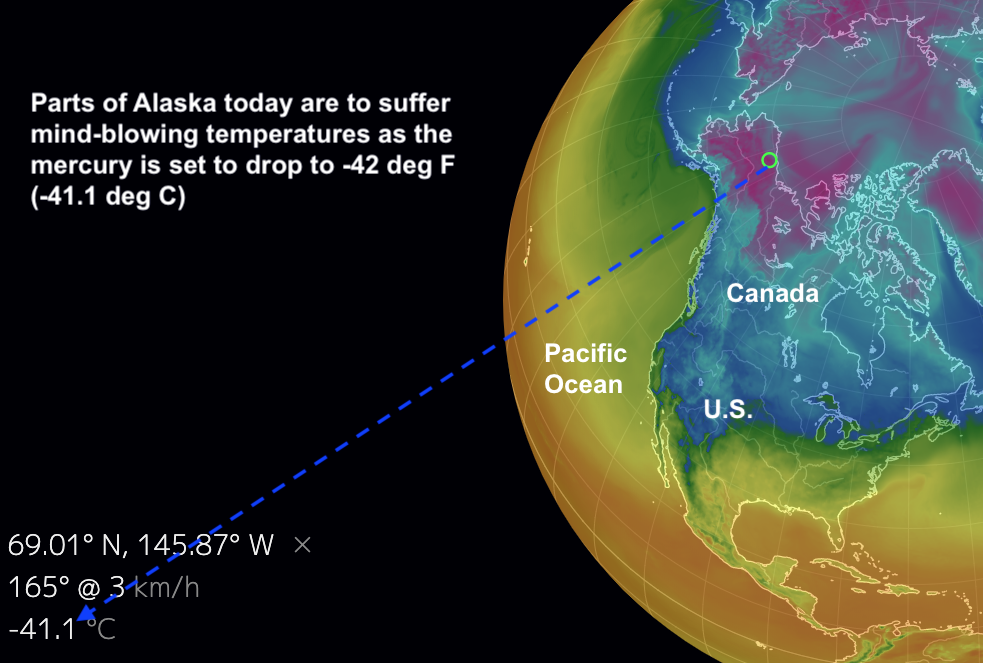 Earthwindmap
As you might expect Alaska is cold, the temperature is set to drop to -42 deg F, (-41.1 deg C) today, the coldest spell of their winter so far. On Thursday, 26th Dec, morning temperatures in Alaska's interior plunged into the 50s below zero in at least two locations north of Fairbanks. The National Weather Service in Fairbanks issued wind chill warnings for parts of Alaska's Arctic coast and other locations in northern Alaska for wind chills that could be as low as 65 degrees below zero (-54 deg C) through Friday or Saturday.

But its heat which has grabbed the headlines this year, record warmth was recorded more or less all year long in Alaska in 2019, Alaska saw a lot of record-breaking warmth in 2019, records were broken in the Spring, the Summer, Autumn and Winter, according to Meteorologist Danielle Banks. Parts of Alaska recorded their warmest February and March on record with temperatures +40 deg F above normal. In July, Anchorage hit 89 degrees F, (32 deg C), to break the all-time highest temperature ever recorded there: Campbell Creek hit 91 degrees F, (33 deg C) and the records kept tumbling! Anchorage experienced six days in a row of 80-plus deg F (27-plus deg C) weather - the longest stretch on record for the city. July 2019 now stands as Alaska’s hottest month on record, which is the latest benchmark in a long-term warming trend with ominous repercussions ranging from rapidly vanishing summer sea ice and melting glaciers to raging wildfires and deadly chaos for marine life.

Of Alaska’s 10 warmest months on record, seven have now occurred since 2004. Alaska waters were completely clear of sea ice as the last ice in the Beaufort Sea melted away by Aug the 4th this year, this is not the first time Alaska's waters have been completely free of ice - in fact, just two years ago, in the summer of 2017, the same thing happened. But what's notable is that during the 2017 melt season, the ice melted much later in the summer.

Even more worrying is the mystery of fish decline in Alaska. Extremely low cod numbers have lead feds to close the Gulf of Alaska fishery for the first time ever. In an unprecedented response to historically low numbers of Pacific cod, the federal cod fishery in the Gulf of Alaska is closing for the 2020 season. It’s a decision that came as little surprise, but it’s the first time the fishery was closed due to concerns of low stock. “We’re on the knife’s edge of this over-fished status,” North Pacific Fisheries Management Council member Nicole Kimball said during talks in Anchorage Friday afternoon. It’s not over-fishing to blame for the die-off, but rather, climate change. Warming ocean temperatures linked to climate change are wreaking havoc on a number of Alaska’s fisheries, worrying biologists, locals and fishermen with low returns that jeopardize fishing livelihoods. A stock assessment this fall put Gulf cod populations at a historic low, with “next to no” new eggs, according to NOAA research biologist Steve Barbeaux, who authored the report.

As we enter the Roaring Twenties in just 5 days Alaska will be central to scientists as they look for a solution as to what is happening on planet Earth.