What A Jolly Good Idea! TEPCO, the owners of the stricken Fukushima nuclear plant to release 1 million tons of radioactive water gradually into the air instead of dumping it into the Pacific 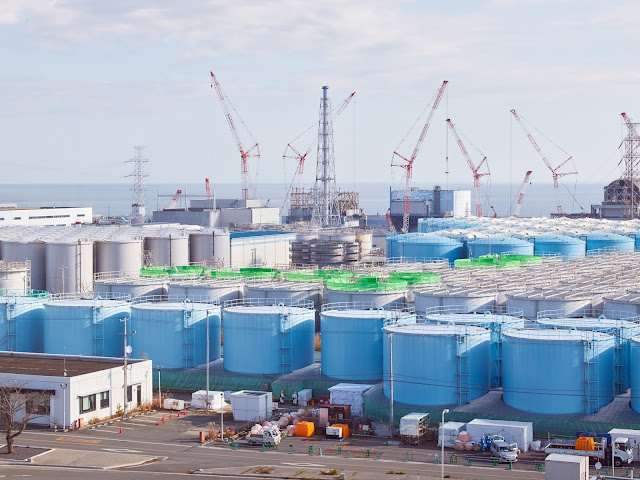 Sent in by Jesse.

In a new twist, the Japanese government have come up with a new proposal which will enable TEPCO, the owners of the stricken nuclear plant to release 1 million tons of radioactive water gradually into the air. The original plan was to dump it into the Pacific, Tepco has always maintained the "treated" water is perfectly safe, even though the water is still radioactive.

Next summer's 2020 Olympic Games is allowing the Japanese government to focus on the games while their unsuccessful attempt to clean-up the ongoing spread of leaking radioactivity from Fukushima approaches its first 10 years since the disaster.

According to Arnie Gundersen of the Fairwinds website, the government of Japan claims that the Fukushima site will be entirely cleaned and decommissioned in less than forty years, a date that will definitely slip AFTER the 2020 Tokyo Olympics are held, and one that is scientifically impossible since some radioactive isotopes will be spread across the Fukushima site and surrounding landscape for 300 years and others for 250,000 years.

Nearly nine years after the 2011 meltdowns of three reactor cores at the Fukushima Dai-ichi Nuclear Plant, radioactive water continues to accumulate as the water used to keep the cores cool leaks from the damaged reactors and is stored in tanks so it won’t escape into the ocean or elsewhere. For years, a government panel has been discussing ways to handle the crisis and to reassure fishermen and residents who fear possible health effects from releasing the radioactive water as well as harm to the region’s image and fishing industry.

Fukushima fishermen and the National Federation of Fisheries Co-operative Associations have strongly opposed past suggestions by government officials that the water is released into the sea, warning of an “immeasurable impact on the future of the Japanese fishing industry,” with local fishermen still unable to resume full operations after the nuclear plant accident. The water has been treated, and the plant operator, Tokyo Electric Power Co., says all 62 radioactive elements it contains can be removed to levels not harmful to humans except for tritium. There is no established method to fully separate tritium from water, but scientists say it is not a problem in small amounts. Most of the water stored at the plant still contains other radioactive elements including cancer-causing caesium and strontium and needs further treatment. In Monday’s proposal, the ministry suggested a controlled release of the water into the Pacific, allowing the water to evaporate, or a combination of the two methods. The ministry said the controlled release to the sea is the best option because it would “stably dilute and disperse” the water from the plant and can be properly monitored.

A release is expected to take years and radiation levels will be kept well below the legal limit, the proposal said. The ministry noted that tritium has been routinely released from nuclear plants around the world, including Fukushima before the accident. Evaporation has been a tested and proven method following the 1979 core meltdown at Three Mile Island nuclear plant in the United States, where it took two years to get rid of 8,700 tons of tritium-contaminated water. TEPCO says it is currently storing more than 1 million tons of radioactive water and only has space to hold up to 1.37 million tons, or until the summer of 2022, raising speculation that the water may be released after next summer’s Tokyo Olympics. AP

At the other side of the mighty Pacific, the latest study shows an increase in levels of Fukushima-related contamination off the shores of Alaska, regular readers of The Big Wobble will know Bill Laughing-Bear has been keeping an eye on fish in Alaskan waters and has warned us all of rising radioactive contamination for years now.

Recently other warnings have been published as the slow drip-feed of information is slowly being released. In 2017, A study by the University of Hawaiʻi at Mānoa revealed almost 50% of fish consumed on the islands of Hawai’i were contaminated with caesium 134 the radioactive finger-print of Fukushima. The report also showed that migrating organisms can transport the Fukushima-signature (caesium 134) over significant distances as they showed detectable 134Cs (6.3±1.5 Bq/kg) in Pacific bluefin tuna caught off the California coast only a year after the incident.

Another study found caesium 134 in longfin tuna (Albacore) along the western coast of the US just one year after the Fukushima disaster. The recent findings as you might expect are being played down and the usual sound-bites are telling us "it's nothing to worry about," something the powers that be have been saying for 9 years now. Another study by Alaska Sea Grant agent, Gay Sheffield claimed, a slightly elevated level of radioactive contamination connected to the Fukushima nuclear disaster has been detected in the northern Bering Sea. The level of caesium-137, a radioactive isotope, is extremely low and not considered a health concern, according to state epidemiologists. The sampling, conducted by residents of Saint Lawrence Island, documents the Fukushima plume’s northern edge arriving in the Bering Sea for the first time and shows levels of caesium-137 higher than they were before the 2011 nuclear power plant accident in Japan. Full story