Global Uprising: Will 2020 be a Global Spring resonating with the historic Arab Spring uprisings in 2011? World’s 26 richest own as much wealth as the poorest half of the global population 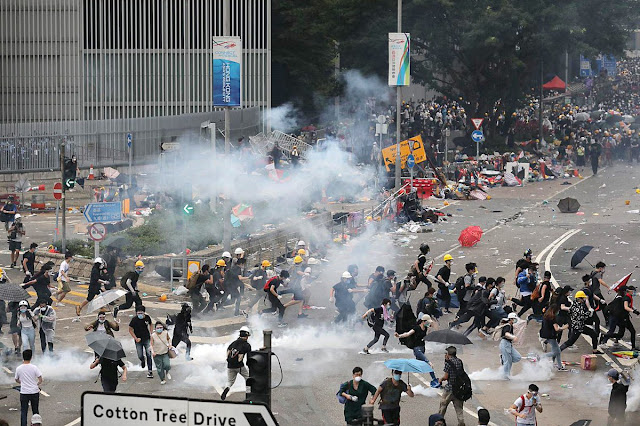 Are the recent escalation of riots and protests against corrupt and week governments around the world this year a precursor to a global version of the Arab Spring, which caused governments to fall, causing millions of deaths from three deadly civil wars and sending even more millions of refugees into Europe?

In 2010, a Tunisian street vendor called Mohamed Bouazizi refused to pay a bribe to local officials, he set himself on fire which triggered a seismic shift in Islamic politics, causing the Arab Spring which brought down the Tunisian, Egyptian, Yemen, and Libyan governments and throwing Yemen, Iraq, Libya and Syria into a deadly civil war sparking a refugee exodus in Europe bigger than the one in WWII.

New Tunisia riots in the cauldron of Arab uprisings

Calm returned to the Tunisian town of Jelma on today after three days of protests sparked by the death of a labourer in circumstances similar to events that started the Arab uprisings in 2011.  Abdelwaheb Hablani, 25, died on Friday after setting himself alight in protest against poverty and poor living conditions in the country, beginning days of running battles through the small town. The town is 30 kilometres from Sidi Bouzid, where the street seller Mohammed Bouazizi set himself on fire in 2010 sparking rallies that forced president Zine El Abidine Ben Ali to step down after 23 years and led to anti-government protests across the Arab world, which became known as the Arab Spring. NWorld

Iranian state television has acknowledged security forces shot and killed what it described as "rioters" in multiple cities amid recent protests over the spike in government-set petrol prices. Amnesty International said on Monday it believes at least 208 people were killed in the protests and the crackdown that followed reports Al Jazeera. However, other reports suggest as many as 900 people have been killed in the riots with 13,000 arrested and more than 6,000 injured. Some officials are boasting of their role in killing protestors. Leila Vaseghi, the manager of Qods township, which saw heavy fighting, admitted in an interview today that she ordered IRGC personnel to kill demonstrators. Crowds had momentarily seized her offices after her security guards ran away or joined the protestors. Vasgehi fled to an IRGC base, and the Guards retook control of the town, after killing an unknown number of people. Gateway Pundit

This month’s protests in Iraq were leaderless but mostly driven by young and unemployed people in a country with a stubbornly high jobless rate and where nearly a quarter of the population live in poverty. It is thought more than 400 demonstrators have been killed since the uprising.

After almost six months of large scale protests in Hong Kong, around 6,000 people have been arrested. Of which, around 500 have been charged with rioting along with several protesters shot dead. Clashes have seen police fire rubber bullets, tear gas, and pepper spray at protesters in repeated bids to break up peaceful demonstrations.

The streets of Barcelona and other Catalan towns and cities is the battleground for Catalonian people who are screaming for independence from Spain. Although the Catalan independence movement has always prided itself on peaceful protests, there have been numerous violent clashes, with police officers attacked with stones, bottles, Molotov cocktails and slingshots, and protesters beaten and shot with rubber and foam bullets.

After nearly two weeks of protests, a coalition of student and workers’ unions have called for another national strike in Colombia on Wednesday. The movement has been reignited by the Nov. 25 death of an 18-year-old protester, Dilan Cruz, at the hands of Colombia’s riot police. In early October, workers’ unions arranged the Nov. 21 demonstrations against proposed economic reforms. (Duque, for his part, denied supporting the measures.) But the protests have since snowballed into an unprecedented mass movement. Hundreds of thousands have flocked to the streets to march, dance, sing and clang pots and pans together to protest myriad issues Pri

Venezuela, the country that was famous for its prosperity and oil production, is today, the country that represents the greatest threat to Latin America and the world. The massive migratory wave, links with drug trafficking and terrorism, and the alliances with totalitarian, socialist, and dictatorial governments represent a ticking time bomb. Thousands of protesters are taking to the streets of Caracas in protest against the government. Today Venezuela

The Lebanese are against a tax on WhatsApp and endemic corruption by weak leaders.
A cross-section of society appears to be represented, spanning the religious and political divides that sparked 15 years of civil war in Lebanon starting in 1975.

A simple hike in the metro fare has caused hundreds of thousands to protest against rampant inequality. The protests began in Chile's capital Santiago but have since spread throughout the land

A fifth term for an ageing president and decades of military rule.

Few corners of the world have been spared significant protests in 2019. Russia, Serbia, Ukraine and Albania have all seen major demonstrations. So have the UK, against Brexit, France, with its yellow vest movement, and Spain, in the restive region of Catalonia. The Middle East has convulsed with so much dissent that some are calling it a second wave of the Arab spring. In South America, Brazil, Peru, Ecuador, Colombia and Venezuela have experienced popular unrest. The list goes on. An explosion of protest, a howl of rage.

"The data shows that the amount of protests is increasing and is as high as the roaring 60s, and has been since about 2009,” says Jacquelien van Stekelenburg, a professor who studies social change and conflict at Vrije University in Amsterdam. Not all the protests are driven by economic complaints, but widening gulfs between the haves and have-nots are radicalising many young people in particular. Oxfam said in January that the world’s 26 richest individuals owned as much wealth as the poorest half of the global population. Billionaires grew their combined fortunes by $2.5bn a day in 2018, while the relative wealth of the world’s poorest 3.8 billion people declined by $500m a day. Thousands of people have joined rolling Extinction Rebellion protests at the lack of action on the climate crisis by leaders content to leave the problem to the next generation. The Guardian

2020 is just around the corner, time will tell but I don't think these protests will decline next year, my money is on a global uprising in 2020.