An incredible 7,000 wildfires in the last 5 months: As the record-breaking wildfires rage on in Australia’s New South Wales and Queensland we are witnessing a “global tragedy” 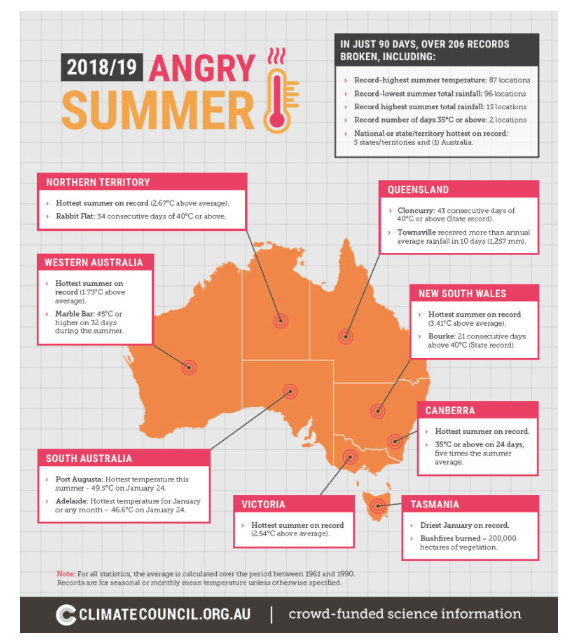 As the record-breaking wildfires rage on in southeastern Australia’s New South Wales and Queensland, conservationists are warning of a “global tragedy” that’s devastating wildlife and destroying forests. Prolonged by a crippling drought and warm weather have resulted in more than 7,000 wildfires in the last 5 months. An incredible 4 million acres of land has been lost including areas of national parks and a World Heritage site according to the Climate Council. The fires have decimated an already struggling wildlife and destroyed more homes than ever before. However, here is the scary part, scientists are forecasting the worst is yet to come as Australia enters its hottest wildfire season of this year, reports the Climate Council

In a new report claims, this summer is shaping up as a terrible trifecta of heatwaves, droughts and bushfires, made worse by climate change and finds the catastrophic events unfolding across Australia are not normal. "We have seen temperature records smashed, bushfires in winter and a prolonged drought," according to Climate Councillor and report author, Professor Will Steffen.

The current prolonged drought across eastern Australia is threatening crops for the third year in a row, and national summer crop production is forecast to fall by 20 per cent to 2.1 million tonnes. The period from January 2017 to October 2019 have been the driest on record for the Murray-Darling Basin as a whole. Wildlife has been badly affected by the ongoing bushfires, with reports of at least 1,000 koala deaths in important habitats in New South Wales, Queensland and South Australia.

The Bureau of Meteorology is forecasting above-average maximum temperatures for most of Australia this summer with eastern Australia likely to be drier than average. “Eastern Australia is currently plagued by drought, with no significant rain in sight to dampen its impact on rural and regional communities, farming, water supplies and the natural environment,” said the Climate Council’s CEO, Amanda McKenzie. The number of heatwave days each year has been increasing in Perth, Adelaide, Melbourne, Sydney, Canberra and Hobart, and across Australia as a whole since 1950. “These heatwaves can have severe effects on human health, including both direct heat illnesses such as heat exhaustion and indirect illnesses such as cardiovascular failure,” said Ms McKenzie.