"It has transformed into an ecological disaster!" Wildfire smoke travelling east from Siberia has reached Alaska, the west coast of Canada, and Seattle 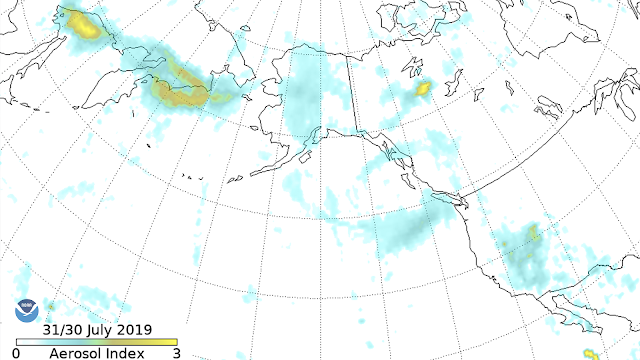 Wildfire smoke travelling east from Siberia had reached Alaska, the west coast of Canada, and Seattle by July 31, 2019, according to an aerosol index from the Suomi-NPP satellite’s Ozone Mapping and Profiler Suite (OMPS) instrument.
The smoke comes from massive forest fires burning across six Russian regions. The country's Federal Forestry Agency on July 29 said more than 10,000 square miles had burned, “an area roughly equal to the size of Crimea,” according to The Moscow Times.
Meanwhile, US President Donald Trump has offered Russia help to battle wildfires that have swept across Siberia, the Kremlin said. Russian President Vladimir Putin declined the offer but called it a step towards improving rocky relations.
Trump called Putin on Wednesday evening, the Kremlin press service said. The Russian president expressed his “sincere gratitude” for Trump's concern and offer of a helping hand.
Gigantic forest fires have regularly raged through the vast expanses of Russia's Siberia, but the magnitude of this year's blazes has reached an exceptional level with fears of a long-term impact on the environment.
As fires sweep across millions of hectares enveloping entire cities in black smoke and noxious fumes, environmentalists warn of a disaster threatening to accelerate the melting of the Arctic.
More than 3.2 million hectares (7.9 million acres) were in the grip of fires on Monday, mainly in the vast regions of Yakutia in the north and Krasnoyarsk and Irkutsk in Siberia, authorities said.
The fires, triggered by dry thunderstorms in temperatures above 30 degrees Celsius (86 degrees Fahrenheit), were spread by strong winds, Russia's federal forestry agency said.
The acrid smoke has affected not only small settlements but also major cities in Western Siberia and the Altai region as well as the Urals such as Chelyabinsk and Yekaterinburg and disrupted air travel.
"The smoke is horrible.
I am choking and dizzy," pensioner Raisa Brovkina, who was hospitalised in Russia's third-largest city Novosibirsk, told state television.
On Sunday, the smoke reached neighbouring Kazakhstan.
A "concentration of pollutants exceeding the norm" was recorded in several cities, including the capital Nur-Sultan, said the Kazakh meteorological service.
Aside from health fears for the local population, environmentalists warn the fires may accelerate global warming.
"The forest fires in the eastern part of the country have long stopped being a local problem," the Russian branch of Greenpeace said in a statement.
"It has transformed into an ecological disaster with consequences for the entire country."
Some scientists posted satellite images from NASA showing the clouds of smoke reaching Arctic areas.
Greenpeace Russia expert Grigory Kuksin said the soot and ashes accelerate the melting of the Arctic ice and permafrost -- the permanently frozen layer that has begun melting -- releasing gases that reinforce global warming. Kuksin called the impact on the climate "very serious."
"It is comparable to the emissions of major cities," he said.
"The more fires affect the climate, the more conditions are created for new dangerous fires."