The sweltering Arctic is ablaze as unprecedented wildfires are ravaging the Arctic: Areas of Siberia, Scandinavia, Alaska and Greenland engulfed in flames 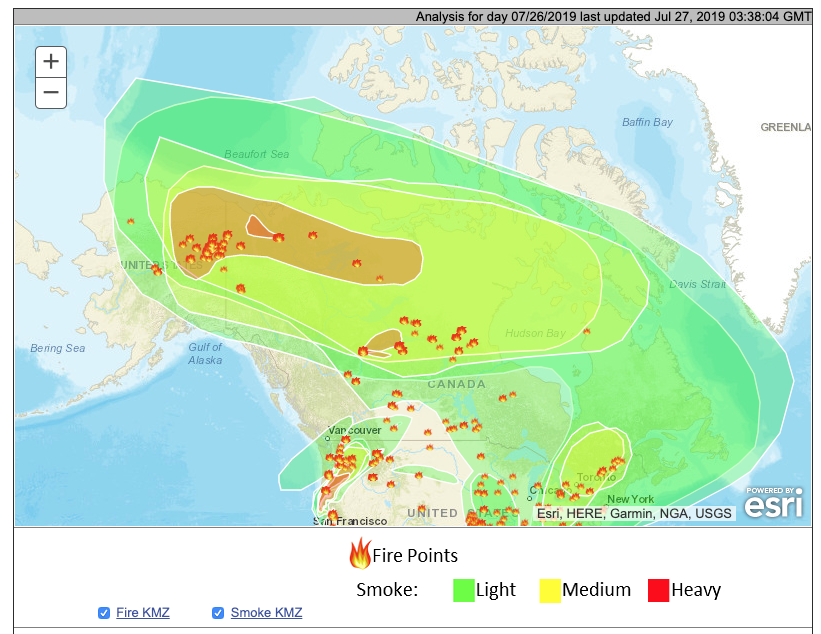 The sweltering Arctic is ablaze, wildfires are ravaging the Arctic, with areas of northern Siberia, northern Scandinavia, Alaska and Greenland engulfed in flames.
Vast areas of Alaska Greenland and Siberia are literally on fire with Alaska alone burning 1.6 billion acres this year.

Alaska has been suffering a heatwave for weeks with temperatures reaching 92 deg F, (33.5 deg C).
In Siberia, massive fires in remote areas are burning out of control.
Lightning frequently triggers fires in the region but this year they have been worsened by summer temperatures that are higher than average because of climate change.
Plumes of smoke from the fires can be seen from space.

Mark Parrington, a wildfires expert at the Copernicus Atmosphere Monitoring Service (Cams), described them as "unprecedented".
There are hundreds of fires covering mostly uninhabited regions across eastern Russia, northern Scandinavia, Greenland, and Alaska.

But smoke is affecting wider surrounding areas, engulfing some places. Cities in eastern Russia have noted a significant decrease in air quality since the fires started.
The smoke has reportedly reached Russia's Tyumen region in western Siberia, six time zones away from the fires on the east coast.

In June, the fires released an estimated 50 megatonnes of carbon dioxide - the equivalent of Sweden's annual carbon output, according to Cams.
Meanwhile, the hot air that smashed European weather records this week looks set to move toward Greenland and could take the world's second-largest ice sheet close to or below the record low set in 2012, the United Nations said on Friday.

Clare Nullis, the spokesperson for the UN World Meteorological Organization, said the hot air moving up from North Africa had not merely broken European temperature records on Thursday, but surpassed them by two, three or four degrees Celsius, something she described as "absolutely incredible."

"According to forecasts, and this is of concern, the atmospheric flow is now going to transport that heat towards Greenland," she told a regular UN briefing in Geneva.
"This will result in high temperatures and consequently enhanced melting of the Greenland ice sheet," she said.
"We don't know yet whether it will be at the 2012 level, but it's close." Melting of Greenland's ice sheet, a key part of the global climate system, would lead to rising sea levels and unstable weather.
Greenland had not had an exceptional year until June, but its ice had been melting rapidly in recent weeks, she said, citing data from a Danish climate scientist.
"In July alone, it lost 160 billion tonnes of ice through surface melting.

Alaska is burning mainly due to dead trees. The spruce beetle has destroyed the spruce tree population up here. It is only a matter of time before we saw it all burn. They decided not to fight the fires so the dead trees can burn off. That is the biggest factor surrounding these fires. Yes there has been some high temps here in south central Alaska but it should be noted that 90-100ºF temps are normal this time of year in the interior part of the state. Next year there will be even more fires, most likely in Denali since it is just covered with dead spruce trees due to beetle kill. The kill is so vast that it is near impossible to manage the forest to log it all out so it will just have to burn. Just wanted to clarify some important details. I live up here in Alaska so I do know first hand what's happening.

It is the content of the atmospheric spraying that will kill us: Aluminum. Barium, Strontium and biologically destructive organics. Habakkuk in the time of the ant-Christ rising says: Habakkuk 3:16,17 (KJV) 16 When I heard, my belly trembled; my lips quivered at the voice: rottenness entered into my bones, and I trembled in myself, that I might rest in the day of trouble: when he cometh up unto the people, he will invade them with his troops. 17 Although the fig tree shall not blossom, neither shall fruit be in the vines; the labour of the olive shall fail, and the fields shall yield no meat; the flock shall be cut off from the fold, and there shall be no herd in the stalls: