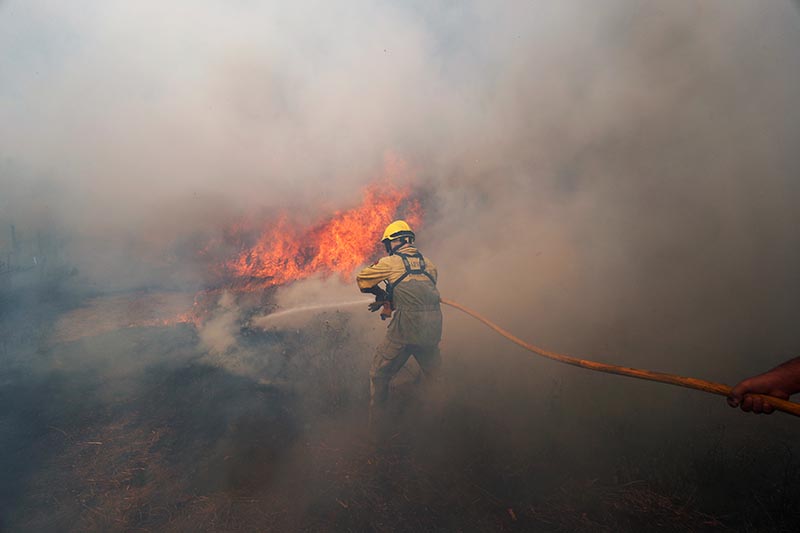 It's what some governments are calling the new weapon of terror, the massive wildfires in Portugal over the weekend were started deliberately.
All the blazes had started in a narrow time frame between 2.30pm and 3.30pm local time on Saturday in the same area.
Recently the Italian, Portugal and Spanish governments along with Australian and Israeli authorities all claiming the wildfires are a new weapon of terror.

More than 1,000 firefighters are tackling wildfires spreading in east Portugal, which have injured 30 people.
Homeowners tried to protect their properties from the huge fires with buckets of water and hosepipes as strong winds fanned the winds on Sunday.
Portugal's Civil Protection Authority said more than 1,150 firefighters were working to contain the blazes, which broke out on Saturday across three fronts in the district of Castelo Branco, 124 miles (200km) northeast of the capital Lisbon.
Authorities said one injured civilian was taken to hospital and is in a serious condition after suffering first and second-degree burns.
Villages and fluvial beaches were evacuated as a precaution and 30 people are known to be injured. Firefighters were being supported by 10 firefighting aircraft as well as hundreds of vehicles.
Some houses were affected by the fires but Portugal's Civil Protection did not provide a specific number.
"The fire is out of control, without resources on the ground, and the population at risk," Vasco Estrela, the mayor of Macao, told Portuguese radio station TSF.
"We never thought we would live through this again."
Marcelo Rebelo de Sousa, the Portuguese president, said he would be in contact with the mayors in the affected areas.
A statement on the presidential website said: "Aware of adverse weather conditions, the President of the Republic conveys all solidarity to the men and women who fight them, as well as to the most directly affected populations, accompanied by all the Portuguese."
Strong winds have made it more difficult for firefighters to tackle the blaze, but authorities said they hoped to have them under control soon.
One wildfire made its way to Macao, an area in the district of Santarum, in western Portugal where temperatures reached 34C (93.2F) on Sunday.
Images broadcast by Portuguese TV channel TVI showed villagers in Macao trying to protect their houses and animals as smoke filled the air, forcing many to wear masks.
"(It will be) an afternoon of intense work," Belo Costa, a Civil Protection official, told reporters. Police have opened an investigation on the fires, with local authorities considering it unusual that all blazes had started in a narrow time frame between 2.30pm and 3.30pm local time on Saturday in the same area.
In a statement, police said that a 55-year-old man was detained on suspicion of starting a blaze in the Portuguese district of Castelo Branco.
One resident said: "The wildfire came with force. We [the residents] had to fight the flames." He said there were not enough firefighters, a worry echoed by Ricardo Aires, the mayor of Vila de Rei which has been affected.
The army is sending 20 soldiers and four bulldozers to help with the operation.
This is the first major wildfire in Portugal this year.
In 2017, 106 people were killed in some of the country's deadliest fires on record.
The Portuguese government backed stronger firefighting prevention methods after the heavy death toll of that year and there were no wildfire deaths in 2018.