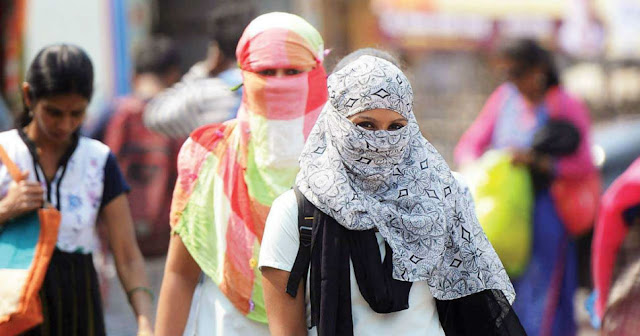 Northern India and Pakistan are bracing themselves for heatwave temperatures to hit almost 50 deg C, (122 deg F) in the coming week.
Extremely dangerous heat is expected across northwest India this weekend, including New Delhi and the National Capital Region where high temperatures may reach 48 C (118 F).
According to Accuweather, temperatures will soar above 40 C (104 F) across central and northern India each day, with widespread high temperatures of 42-46 C (108-115 F).
India endures lengthy heat waves each year prior to the arrival of monsoon rainfall.
More than 6,000 heat-related deaths have been reported in India since 2010, according to the Times of India.
In 2016 more than 2,000 people died from heatwaves in Pakistan.


More than 2,000 people across Japan were taken to hospital for heatstroke last week.
The number was four times higher than the week earlier.
The Fire and Disaster Management Agency revealed that there were 2,053 heatstroke patients in the week to May 26.
Four of them died, 532 had to be hospitalized, and 1,476 had minor symptoms.
About 40 per cent of the patients were age 65 or older.
Of the remaining patients, 618 were between 18 and 64 years old and 537 were under the age of 18. The agency says the number of people carried to hospital increased sharply as unseasonably hot weather continued across Japan last week.
The temperature in Hokkaido, northern Japan, hit 40 degrees Celsius.
Weather officials forecast that temperatures will also be hotter than average on the first 10 days of June in the northeastern, central and western parts of Japan.
They are calling on people to take precautions against heatstroke, including staying hydrated and avoiding direct sunlight.

A heat wave springing from North Africa has hit Turkey, bringing the average temperatures to the extreme levels.
"The temperatures will rise significantly across the country, floating well above the seasonal norms," said a statement by the Turkish Meteorological Service on May 27.
"The temperatures are forecast to reach extremely high levels recorded in any month of May as of May 28," it added.
The meteorology authority said that temperature across Turkey would rise 5 to 10 degrees Celsius because of a heat wave coming from the continent of Africa and affecting the country for the whole week.
The temperature is expected to hit 40 deg C in the southeastern province of Sanliurfa and 36 C in the eastern province of Malatya, according to the statement.
Officials urged locals to avoid staying outdoors between 10 a.m. and 4 p.m.; especially children, elderly and those with chronic illnesses should avoid direct exposure to sunlight, they said.