Mount Agung Indonesia blows again: As volcanoes around the world are waking up after an unusual quiet period 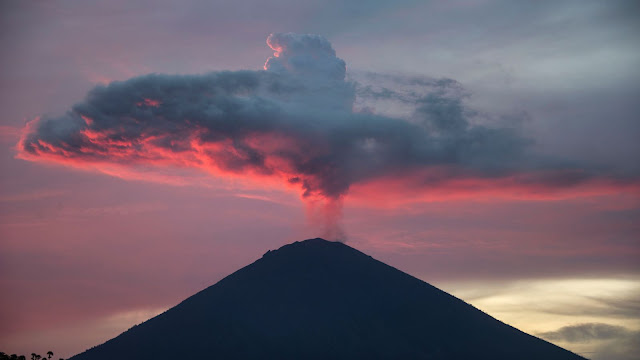 A volcano on the Indonesian island of Bali erupted Friday, spewing a plume of ash and smoke more than 2,000 meters (6,500 feet) into the sky.
Mount Agung, about 70 kilometres from the tourist hub of Kuta, has been erupting periodically since it rumbled back to life in 2017, sometimes grounding flights and forcing residents to flee their homes. The latest eruption shortly before noon on Friday shot a cloud of volcanic ash high into the sky, but caused no disruption to flights, Indonesia's geological agency said.
Agung remained at the second highest danger warning level, and there is a four-kilometre no-go zone around the crater.
Last summer, dozens of flights were cancelled after Agung erupted, while tens of thousands of locals fled to evacuation centres after an eruption in 2017.
The last major eruption of Agung in 1963 killed around 1,600 people.
Indonesia is situated on the Pacific "Ring of Fire", a vast zone of geological instability where the collision of tectonic plates causes frequent quakes and major volcanic activity.

This week Pacific Ring of Fire has ramped itself up with the biggest quake of the year so far, along with four major volcano eruptions and a swarm of almost 200 quakes in northern New Zealand.
Mount Sinabung Volcano, North Sumatra exploded during last night, generating an ash plume that rose to possibly up to 15 km altitude (50,000ft).
The height of the plume was estimated by VAAC Tokio using satellite imagery.
It quickly drifted and dissipated in southerly directions.
Yesterday, the fiery grumbling colossus, Mount Agung volcano has once again erupted on the Indonesian holiday island of Bali.
Mount Agung volcano spewed out lava and showers of rocks over a distance of about 3 km (2 miles), with ash falling over dozens of villages, officials said.
According to Reuters, authorities had 50,000 masks available as a precaution though the alert level on the volcano remained unchanged and there had been no evacuations.

A swarm of earthquakes has rocked White Island, New Zealand with 196 quakes of various magnitudes recorded since Thursday.
White Island, or Whakaari, lies 50km offshore from Whakatane and is an active marine volcano. GeoNet duty volcanologist Natalia Deligne confirmed that a swarm of quakes started on Thursday and over the last 24 hours the rate and magnitude had increased.
On Friday the Philippine Institute of Volcanology and Seismology (Phivolcs) recorded 14 volcanic earthquakes during a 24-hour observation of Taal Volcano in Batangas.
Likewise, based on Phivolcs' field measurements since May 16, the western sector of Taal Volcano's main crater lake yielded an increase in water temperature from 32.2 degrees Celsius (°C) to 33 °C, a decrease in water level from 0.18 meter to 0.08 meter, and decrease in acidity from pH 2.87 to pH 2.83.

Mont Etna, Italy, a new eruption started overnight, a small effusive fissure opened on the south-south-eastern base of the New SE crater and generated a small lava flow which is still active now.Another lava flow originated from a vent on the SE side on the same cone, near the area where the eruption in Dec 2018 had started.The seismic activity started to rise last evening, peaked around midnight, then decreased a bit, but has been more or less stable since.According to Volcanodiscovery.com, the eruption which began in the early hours of 30 May 2019 from new fissure vents on both the NE and SE sides of the New Southeast Crater continues with little change.Two lava flows, well fed, are moving into the Valle del Bove accompanied by loud strombolian activity at the vents.

An expedition leader and correspondent Enku reported that an explosion occurred in the Danakil Depression around 01:47 am local time on 27 May, and possibly came from a (presumably short-lived) eruption.
According to his report, a fissure? opened in the area north of Afdera volcano and south of the Erta Ale range, Ethiopia, near the contact between the salt plain and the volcanic range.
Contacts from on location and at the university confirmed him that an eruption actually took place and formed a small cone.
We were not able to confirm that an eruption actually took place independently as no heat signals or ash plumes, nor unusual seismic activity or other news have been found so far.
Until further investigation, this report of a new eruption, entirely possible and not unusual for this area, needs to be taken with caution.