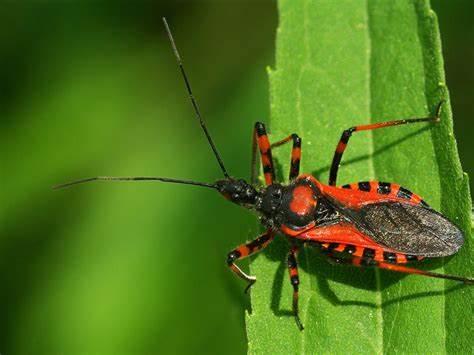 Photo drweil.com
The parents of a family in Delaware sought out the CDC in July 2018 to help identify a bug that had bitten their daughter while she was watching TV in her bedroom.
The agency later identified the bug as Triatoma sanguisuga from a photo sent in by the family.
It was the first reported encounter of a kissing bug in the state of Delaware, according to the CDC. Typically found in warm climates in Asia, Africa, Australia, Latin America and the southern United States, Triatomine bugs, also known as cone-nosed bugs, vampire bugs, assassin bugs and bloodsuckers, are about twice the size of a penny and gets its name for its propensity for biting humans on their faces and lips.
There is documentation of kissing bugs in many states in records dating to the 1800s, according to Texas A&M researchers.
They are most common in the U.S. in New Mexico, Arizona and Texas.
Mostly active at night, the kissing bug feeds on the blood of mammals, bird and reptiles.
They live in a wide variety of environmental settings but typically in the proximity of an animal upon which they can feed, the CDC reports.
They also can be found in wooded areas, beneath porches, under cement, between rocky structures, in outdoor dog houses or kennels, in rock, wood and brush piles or beneath the bark.

Chagas disease is named after the Brazilian physician Carlos Chagas, who discovered the disease in 1909.
It is caused by the parasite Trypanosoma cruzi, which is transmitted to animals and people by insect vectors and is found only in the Americas (mainly, in rural areas of Latin America where poverty is widespread).
Chagas disease (T. cruzi infection) is also referred to as American trypanosomiasis.

According to The Weather Channel, the bug can transmit a parasite known as Trypanosoma cruzi, which can lead to Chagas disease, a parasitic illness that can cause serious cardiac and gastrointestinal complications, Jacqueline Petty of the CDC told weather.com.
While kissing bugs carrying Chagas disease is common in South and Central America, most types native to North America carry less risk of this disease, according to Western Exterminator.
The first case of Chagas disease in the United States was reported in 1955, Petty said.
Roughly 300,000 people with Chagas disease live in the U.S. today, mostly contracted from the Triatoma cruzi variety of kissing bug and mostly after being infected while living or travelling to parts of Central and South America.