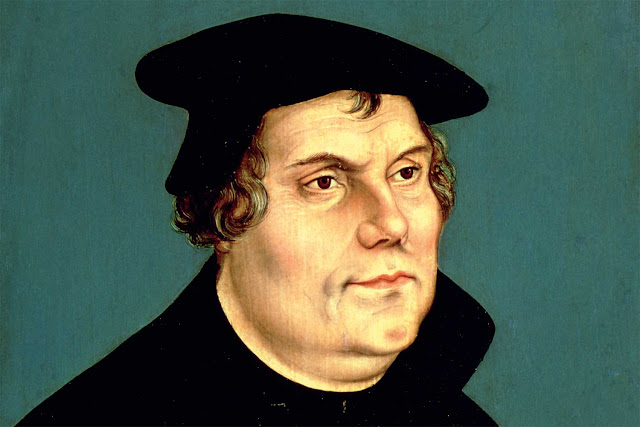 Photo historianet.fi. Martin Luther, A German professor of theology, composer, priest, monk and a seminal figure in the Protestant Reformation, he was born in 1483 and his "estimate" of the beginning of creation was 3,961 BC.

Enoch prophesied mankind would have 7,000 years of history but why should we believe what Enoch claims?
The book is an ancient Jewish religious work, ascribed by tradition to Enoch, the great-grandfather of Noah and copies of his book were found in the dead sea scrolls. According to Ken Johnson, most Christian denominations and traditions may accept the Books of Enoch as having some historical or theological interest, but they generally regard the Books of Enoch as noncanonical or noninspired religious work, however, part of Enoch's book is mentioned in detail in the penultimate book of the Bible, The Epistle Of Jude, a servant of Jesus, which would, therefore, give rise to the authenticity of Enoch's book. Enoch is also mentioned in the first book of the Bible, Genesis.
The Ancient Book of Enoch contains numerous prophecies about the flood which happened in Noah's time and the fire judgment which is coming and, the two comings of the Messiah, the first being 2,000 years ago as we know. Enoch teaches us that the Messiah is the Son of God and that He will shed His blood to redeem mankind. The Ancient book of Enoch prophesies a window of time in which the Second Coming of the Messiah would occur, he prophesies that there will be twenty-three Israeli Prime Ministers ruling in a fifty-eight term period from AD 1948, when Israel became a nation again, to the beginning of the Tribulation period, and much more.
The Ancient Book of Enoch may predate the Old Testament by an incredible 1,000 years. Ken Johnson the Biblical scholar wrote of the Ancient Book Of Enoch; "If we find it contains accurate prophecy, we must see it as a true gift from God.

Elijah who is thought to be the greatest of all Jewish prophets and he formed a "school of prophets."  The great prophet Elijah taught the world was to exist for 7,000 years and it is thought, Elijah took this information from the Ancient Book Of Enoch which teaches the same prophecy.

The history of mankind will last for 7,000 but according to the Bible, 1,000 of them years will come after Armageddon, when Jesus will rule Heaven and Earth, after which Satan will be allowed to roam Earth once more to test mankind for a short period before he is destroyed forever.
Enoch prophesied mankind would have a 7,000-year history, take away the 1,000 years for Christ’s Millennial Reign, which would leave us with 6,000 years of history, the other 1,000 coming on the other side of Armageddon.
If we could come up with the exact date of creation, a simple mathematical equation adding 6,000 years onto the date of creation would give us an exact date of the return of our Lord Jesus Christ.
( Massive spoiler alert; let me remind you, Jesus said, not one person knows when Jehovah's day, (Armageddon) will be, only God himself.)

The Date Of Creation

The problem is no one can agree on the exact date for the creation of mankind. Many scholars have attempted to find an actual date of creation and although most come up with a ballpark figure of around 50 years or less, they all can't agree on one actual year, so, I have used two different scholars from different time periods to help me with Enoch's prophecy. ( I have no evidence whatsoever the two dates I have chosen are the correct ones).

My first choice is Martin Luther who was a German professor of theology, composer, priest, monk and a seminal figure in the Protestant Reformation, he was born in 1483 and his "estimate" of the beginning of creation was 3,961 BC.
let's take Martin Luther's creation date of 3,961 BC, add to that 2,019 AD which is where we are at today and we arrive at the scary number of 5,980, just 20 years short, of the 6,000 years prophesied by Enoch. The date of Armageddon if Martin Luther's creation date is correct, Armageddon will happen in the year 2039.

Other attempts by a scholar to arrive at the date of creation.

James Ussher (1581-1656), the famous and respected Archbishop of Ireland.
Ussher relied solely on data from the Bible to erect his historical framework. He chose the death of King Nebuchadnezzar as a reliable date upon which to anchor all the earlier biblical dates. Working meticulously backward from there, he ended up with his date for the creation of October 23, 4004 BC. His creation date would mean Armageddon would have happened 23 years ago in 1996, which as we know didn't happen.

Part 1: What if the Tunguska event The Four Horses Of The Apocalypse and Daniel's prophecy all link to 1914

Part two: "The beginning of the pangs of distress" begun in 1914 and will finish around 2064 according to Bible prophecy and the Ancient Book Of Enoch