Mystery unfolding as 20,000 guillemots have died off the northern coast of Holland while thousands of headless fish wash up just a 100km away in Germany 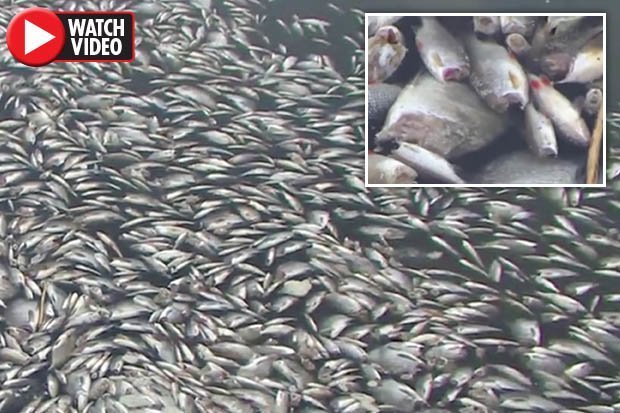 
Scientists are trying to find out why some 20,000 guillemots have died in recent weeks along the Dutch coast.
The birds were all emaciated and there are fears they may have been victims of a spill from the MSC Zoe container ship, from which some 345 containers fell in the sea during a storm, although experts stress its too early to blame the ship container spill.
Mardik Leopold, a seabird expert from Wageningen University, said the figure of 20,000 dead guillemots was based on educated guesswork.
"That's based on the average trending rate of one guillemot per kilometre of beach per day in the Netherlands with 300km [186 miles] available. That's 10,000 birds," he told the BBC.
A similar number would have been left in the sea, he added.
Although he is keeping an open mind, he points out that the birds began washing up at the time of the container spill.
Bad weather can also affect a guillemot's access to food, but Mr Leopold believes the problem would then not have been confined to the Dutch coast.
On Wednesday, Dutch authorities said that at least 345 containers had fallen off the ship, 54 more than first thought.

Meanwhile, just a 100 km east another mystery is unfolding as thousands of headless fish with their bladders torn out have mysteriously washed ashore in Germany.
The deaths have left the authorities puzzled after first washing ashore last Thursday.
In bizarre footage posted by German publication Focus, a blanket of dead fish is seen covering 150 square meters of the harbour in the small town of Mecklenburg-Vorpommern.
Birds appear to pick at the growing pile of the decapitated fish, while specialists appear to scoop some out of the water.
Many of the different sized fish are missing their heads while nearly all appear to have had their bladders torn out.