Water crisis developing in Iraq after tens of thousands of dead carp wash up and 100,000 people hospitalized from water pollution 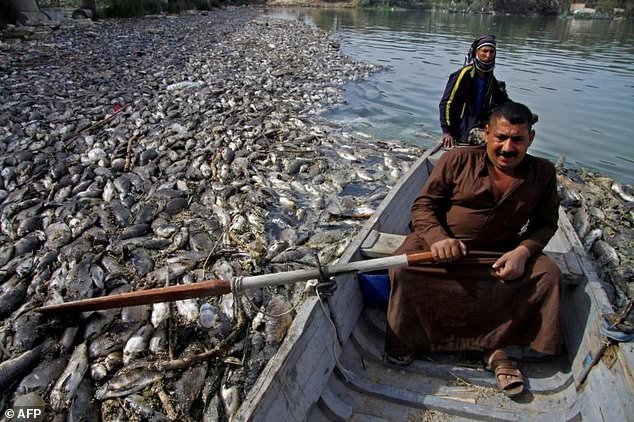 Photo AFP
Iraqi fish farmers south of Baghdad have been left reeling after finding tens of thousands of dead carp mysteriously floating in their cages or washed up on the banks of the Euphrates.
Piles of the dead silvery fish, along with a few car tires and plastic bags, could be seen on Friday lying under a massive concrete bridge.
They covered the surface of deeper water nearby, providing rich pickings for birds circling above. And in the fish farms of Saddat Al Hindiyah in Babylon province, about 80 kilometres south of Baghdad, the lifeless carp floated together in large clumps.
Farmer Hussein Faraj frantically scooped dead fish out of his enclosure in a red plastic crate, fearing they were poisoned.
"Some are saying it's because of a sickness, others say it's because of chemicals," said Faraj, his thick black hair standing on end and his eyebrows furrowed in worry.
"We're waiting for a solution from the government or a test of the water - we're scared the water will poison us in the coming days, too."
Major water pollution has already kicked up a stink in Iraq once this year, as around 100,000 people were hospitalized this summer in the southern city of Basra.
There, too, farmers were shocked to see their fish suddenly turn up dead in the water, or washed up on muddy shores, during the Summer crisis.
In Saddat Al Hindiyah on Friday, distressed farmers were pulling fish from their enclosures in nets, and opening up gills to check for clues to the shocking mass deaths.