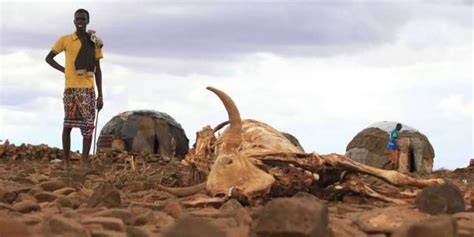 Photo nation.co.ke
Thousands of goats, sheep, and cattle have died from a suspected lung infection in Taita Taveta County, Coast region, Kenya, sparking fear that the outbreak could wipe out entire flocks.
Some farmers accused the county livestock department of not intervening in time to prevent the deaths, as well as curb the spread of the infectious disease.
According to reports from local farmers and the department, more than 5000 young goats, sheep, and cattle have died in the past 2 weeks.
The young ones of some wild animals have not been spared either.
Farmers claimed the animals could have contracted the disease from livestock coming from outside the county.
Their animals, they claimed, were not vaccinated against some infections.
But Agriculture, Livestock and Fisheries Executive Davis Mwangoma attributed the deaths to lung congestion caused by sudden temperature changes.
Dr. Mwangoma said temperatures drop suddenly in the region when heavy rains follow a prolonged drought.
"The (sudden) differences in temperatures led to congested lungs in livestock leading to their deaths," said the executive yesterday.
Mwangoma's explanation was also supported by the Veterinary Diseases Investigations department at Mariakani that conducted the research on the deaths of the livestock.
Briefing The Standard, Mwangoma said bad weather conditions congested the animals' lungs, leading to the deaths.
He refuted claims that the animals had died of a lung infection.
Mwangoma spoke as farmers maintained that the livestock died of a lung disease.
Yesterday, the executive clarified that most livestock was kept outside bomas [cow sheds], subjecting them to changing weather patterns.
"Bad weather affected the livestock.
We advise the farmers to ensure that just before the rains start, goats and sheep need to be sheltered to avert deaths," said Mwangoma.
But the farmers told off the executive and accused him of misleading locals about the livestock deaths.
"The county administration is yet to conduct vaccination against diseases in the region.
We are blaming it on lung disease that has left a heavy toll in the region," said a farmer identified as Adan, who said [he] lost more than 700 livestock.
Records indicate that the Kasigau location had lost more than 1000 goats and sheep.
Farmers said the worst-hit areas include ranches bordering the Tsavo National Park and settlement areas.
"A lung disease is killing our animals," claimed Kishagha Dio from Kasigau in Voi.
A recent drought management report, from the National Drought Management Authority, noted that during drought, animals grew thin and their health deteriorated due to inadequate pasture, water, and fodder.