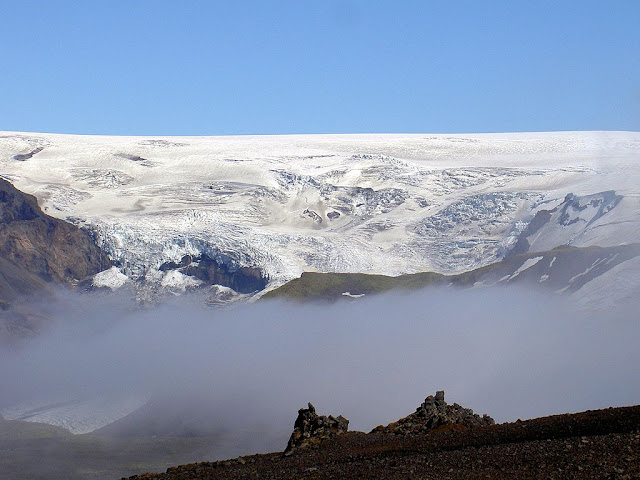 The Mýrdalsjökull glacier in 2005 Wikipedia

New research indicates that magma could be building up under one of Iceland's largest volcanoes, Katla.
A significant amount of volcanic gas has emanated from the South Iceland volcano, according to researchers in the area whose specialized aeronautical equipment detected the anomaly.
Katla is one of the largest central volcanoes in the country, though it does not have regular eruptions; in the past 1,000 years, it has erupted every 49 years on average, with intervals of up to 200 years. Since late 2011, Katla has shown signs of agitation, with many hundreds of small earthquakes.
In July 2011, a short-lived subglacial flood took place, followed by an intense swarm of earthquakes on Oct. 5, 2011.
Evgenia Ilyinskaya, a volcanologist from the University of Leeds, is a member of the group of scientists who detected the gas from Katla.
She said that the discovery came as a complete surprise.
A high concentration of carbon dioxide was flowing out of the Iceland volcano.
There wasn't any similar activity at other volcanic areas in the vicinity.
"We're seeing around 20 kilotons of carbon dioxide, which is an astonishing amount," she said in an interview with RuV.
She went on to say that the amount of carbon dioxide made it a little less likely that it was simply a normal feature of the geothermal system.
There's likely a buildup of magma underneath producing that quantity of gas.
"We've measured there two years in a row.
We measured in October 2016 and October 2017, but we'd like to do further research.
We need to know whether the gases are constant in such a large proportion or if it has increased.
We know that, in other volcanic areas in the world, for example, in Hawaii and Alaska, the gases increase weeks or even years before an eruption.
It's clear that we need to continue to monitor Katla."
"These conclusions show that there's something going on there," Evgenia said.
Evgenia says that they've measured a meaningful amount of methane at the site.
The smell of sulphur was detected near the glacier that sits atop the Iceland volcano when the researchers flew equipment over Emstrua and Mulakvisl.
Volcanic gases may now be in dangerous concentrations in dangerously where the two rivers emerge from beneath the glacier. It's unclear when Katla will erupt.
Volcanologist Jonas Eliasson, a professor emeritus at the University of Iceland, speculated in 2014 that an eruption is 60% likely within the next 50 years, and 90% likely by 2023.