The true state of America's coastal and waterways: Thousands of tons of dead marine life is impacting the US every month and it's getting worse 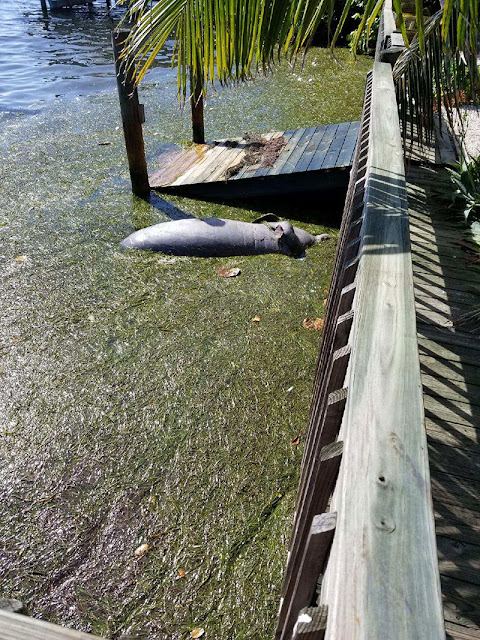 Manatee, marine life fatalities add up
A dead manatee floated up in Anna Maria Sound Aug. 26 to the dock at the Sunrise Lane home of Holmes Beach Commissioner Judy Titsworth.
She said there were only a few dead fish on the waterway, but red tide is suspected in the manatee death.
She said a team from Mote Marine Laboratory was on its way to collect the manatee. Islander Courtesy Photo: Judy Titsworth

Below is just a handful of fish-die-offs in August which impacted the US, these catastrophes are mostly only covered by local news stations and never linked together nationally which keeps the "big picture" out of the eyes of the greater public who understandably have no idea of the carnage, our oceans and waterways are dying.

Manatee County officials cleaned up almost 250 tons of dead fish due to Algae bloom.
This week, Manatee County officials asked volunteers to take the leading role in cleaning up the dead fish left by red tide’s assault on local beaches and waterways.
As of Monday, the county had already collected almost 250 tons of red tide-related debris left on Manatee County beaches, parks and waterways, cleaning up the majority of fish kills, officials announced during a news conference. Full story
Meanwhile, 150 miles further south 135 dead turtles, plus dolphins and manatees have been washing up since July in Sarasota, Florida. Full story
Another 100 miles further south and a week earlier 309 tons of dead fish were cleared from Sanibel beaches. Full story
On the same day, the latest numbers from Lee County officials revealed that well over 3 million pounds of fish have been removed from local coastlines.
The county reports that contractors removing fish from Lee County beaches have amassed more than 1,400 tons of fish as well as the 309 tons removed from Sanibel beaches. Full story
At the end of June hundreds of dead fish, manatees, sea turtles, eels and other marine life washed up in Boca Grande, Florida. Full story
On the West coast, Malibu Lagoon State Beach became the latest American coastal area to suffer a massive fish die-off as thousands of Mullet succumb to the heat Full story
On the 19th of August decades of chemical pollution was suspected for hundreds of dead or dying seals washed up this year in Maine Full story
Mystery surrounds thousands of dead fish in Verdigris River in Oklahoma Full story
On the 17th of August thousands of dead fish where found in Pamlico River, North Carolina. Full story
On the 12th August 2018 - Thousands of dead crabs washing up along the coast of Oregon, reason unknown. Full story