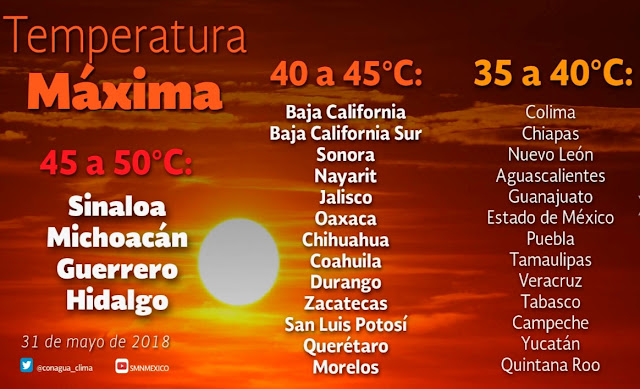 Photo Servicio Meteorolico Mexico
A heat wave in Mexico that has increased temperatures to 50 C (122 F) in many areas has led authorities to declare a state of emergency, the country's National Weather Service (SMN) said Thursday.
According to the SMN, temperatures could rise to 50 C in the northern state of Sinaloa, the western state of Michoacan and the central state of Hidalgo, while temperatures in the rest of the country will exceed 30 C (113 F).
The SMN recommended residents to stay alert to announcements made by the National System of Civil Protection and by state and municipal authorities, as well as to take preventative measures such as staying hydrated and avoid excessive exposure to the sun.
Civil Protection declared a state of emergency in numerous municipalities throughout the country, allowing the use of federal funds to help states and local authorities assist residents during the heat wave.
The world's hottest ever temperature belongs to Death Valley at134.1 degrees (56.7 Celsius), set July 10, 1913, but Weather Underground does not believe it is a credible measurement:
“The record has been scrutinized perhaps more than any other in the United States,”
“we don’t have much more to add to the debate aside from our belief it is most likely not a valid reading when one looks at all the evidence.”
If you discard the Death Valley record from 1913, the 129.2-degree F (53.9 Celsius) reading from Mitribah June 2016 would tie the world’s highest known temperature, also observed in Death Valley on June 30, 2013, and in Tirat Tsvi, Israel, on June 22, 1942.
But Masters says the Israeli measurement is controversial.