"The dark arts of diplomacy?" American diplomat at the US consulate in Guangzhou China diagnosed with a mild traumatic brain injury 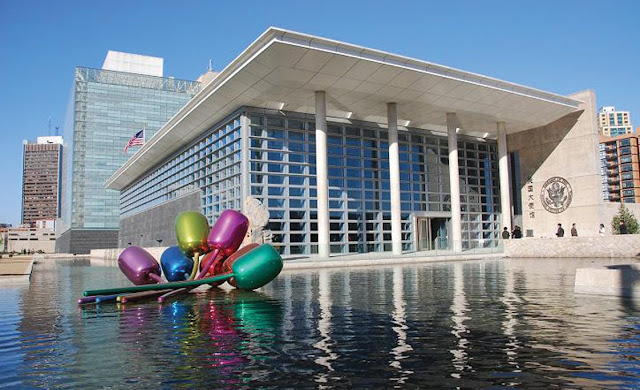 Photo china.usembassy-china.org.cn
Last year, US and Canadian diplomats in Cuba were hit by a strange sickness and many suspected a malevolent sonic weapon attack.
Now, it appears to be happening again.
Only this time, it's in China. US officials released a statement on Wednesday warning federal employees based in China to beware of any unusual sounds.
This follows an incident involving one American diplomat working at the US consulate in Guangzhou, who was diagnosed with a mild traumatic brain injury after experiencing "subtle and vague, but abnormal, sensations of sound and pressure".
The origin of the illness remains a mystery but the US embassy in China is advising employees to take precautions and consult a medical professional if symptoms or medical problems develop during a trip to China.
And if any atypical noises or sensations are detected, they ask citizens to remove themselves from the source immediately.
"While in China, if you experience any unusual acute auditory or sensory phenomena accompanied by unusual sounds or piercing noises, do not attempt to locate their source.
Instead, move to a location where the sounds are not present," the statement advised.
Affairs between China and the US are a little rocky at the moment, with tensions over North Korea and concerns that a trade war could erupt if negotiations over US exports don't go to plan.
But Beijing has assured the US that it is currently investigating the situation "in a very responsible manner" and has not "found that any organization or individual has carried out such a sonic influence."
During a Washington press conference with US Secretary of State Mike Pompeo, Chinese Foreign Minister Wang Yi told journalists that "China will, in accordance with the law, protect all the lawful rights and interests of foreigners in China, especially those of diplomats."
He added that they hope the incident won't be "magnified, complicated, or even politicized." Unsurprisingly, the case has drawn parallels to the episode in Cuba last summer that affected at least 21 US diplomats in Havana.
(Since then, there have been reports of similar "attacks" on tourists.)
Those involved reported hearing unusual noises before falling ill with headaches, insomnia, and memory issues and developing mild traumatic brain injuries - for no apparent reason.
Investigations to determine the cause of this mystery sickness are still ongoing, though the sonic weapon theory - however exciting - appears unlikely.
One possible explanation could be mass hysteria.
As for the incident in China, only one employee has been affected so far.
"We do not currently know what caused the reported symptoms and we are not aware of any similar situations in China, either inside or outside of the diplomatic community," the US Embassy has said.