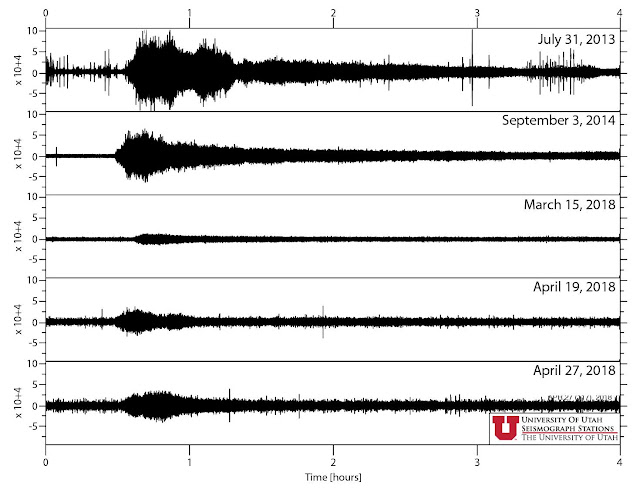 Photo USGS Volcanoes
The world's largest active geyser has erupted three times in the past six weeks at Yellowstone National Park, including once this week, in a pattern that is unusual but not at all indicative of a more destructive volcanic eruption brewing beneath Wyoming, geologists said on Saturday.
Steamboat Geyser, which can shoot water as high as 300 feet (91 meters) into the air, erupted on March 15, April 19 and on Friday.
The last time it erupted three times in a year was in 2003, the U.S. Geological Survey's Yellowstone Volcano Observatory said.
The last time it erupted prior to March was more than three years ago in September 2014.
"There is nothing to indicate that any sort of volcanic eruption is imminent," Michael Poland, the scientist in charge for the observatory, said in an email.
This year's eruptions have been smaller than a usual Steamboat eruption, but the two in April were about 10 times larger than an eruption at the park's famed Old Faithful Geyser in terms on the amount of water discharged, he said.
Geologists have not pinpointed a reason for the latest series of eruptions, but say they could indicate a thermal disturbance in the geyser basin, or that Steamboat may be having smaller eruptions instead of one large.
Since most geysers do not erupt on a regular schedule, "it might just reflect the randomness of geysers," Poland said.
Only Waimangu Geyser in New Zealand has rocketed to greater heights than Steamboat, but not for more than 100 years, the U.S. National Park Service said.
Yellowstone sits atop a volcano that created a vast crater.
Its plateau hosts the world's most diverse and expansive continental hydrothermal systems, including the multicoloured springs, mud pots and geysers for which the park is known.
While the Steamboat eruptions are unusual, what would be far more worrying would be the water in the hydrothermal systems drying up, which could indicate that the super hot magma deep below was making its way to the surface.
"Yellowstone hasn't had a volcanic eruption for 70,000 years! Geysers erupt all the time," said Jake Lowenstern, a USGS research geologist who specializes in volcanoes.

Via USGS VolcanoesSteamboat Geyser in Yellowstone National Park sure has been active lately - 3 water eruption in 6 weeks (March 15, April 19, and April 27)!University of Utah Seismograph Stations seismic and U.S. Geological Survey (USGS) water gage data (Tantalus Weir) indicate that a water eruption of Steamboat began today around 6:30 a.m. Mountain Time.
That’s only 7 days since it last erupted on April 19. After the March 15 water eruption (first since 2014), National Park staff installed a temporary temperature logger, which recorded a spike of around 60 degrees Celsius for the April 19 eruption.
Temperature data haven’t yet been downloaded for the water eruption today.
There were eyewitness reports of a vigorous steam phase a couple hours after today's water eruption phase began.When comparing the seismic amplitudes for the March and April water eruptions, we note that the April events were a little stronger than the one in March.
However, the seismic signals from these three were all much smaller than major water eruptions in 2013 and 2014.We will be sharing more information about this interesting recent activity at Steamboat in this Monday’s edition of Yellowstone Caldera Chronicles -- look for it on social media and the YVO website homepage!