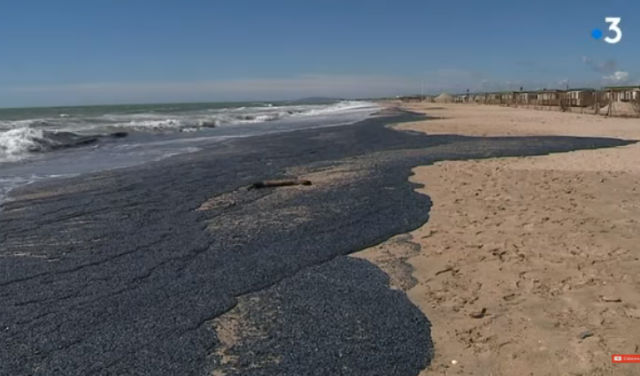 Photo: Screengrab France 3/YouTube
The coastline of the French resort Palavas-Les-Flots turned a dark purple Tuesday after jellyfish-like organisms called velella velella washed ashore in the billions.
It's not uncommon for velella velella clusters to wash up on US coastlines.
When spring arrives they move closer to shore, making them susceptible to being pushed ashore due to strong winds and storms.
While velella velella clusters are a somewhat regular occurrence on U.S. coastlines, this marks the first time they've been observed on this part of the French coast.
Though often mistaken for jellyfish, each velella velella is actually made up of a colony of smaller creatures called hydrozoans that bond together, resembling a single organism.
The jellies, which can give off an odour when stranded on a beach, possess a venom that can irritate the eyes and the mouth, prompting ocean experts to advise the public to avoid coming into contact with them.