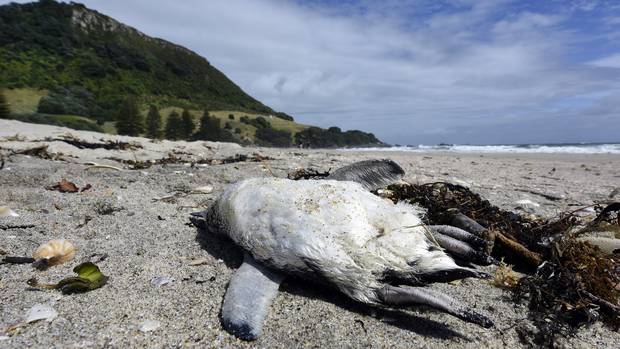 A little blue penguin washed up on Mount Maunganui Main Beach. Photo / George Novak
Marine advocates are calling a large number of little blue penguins washing up along the Bay of Plenty coastline the "biggest penguin die-off in many years".
The Department of Conservation (DoC) Tauranga office had answered an average of five calls each week since February, and Western Bay Wildlife Trust's Julia Graham said the trust had 58 calls about dead penguins in two weeks.
"All of the penguins were dead, or died within a short time of arriving on land," Graham said. Hundreds of shearwaters, petrels, prions, shags and penguins, including dead poisonous pufferfish, were reported to have washed up along the coastline in January this year.
Graham said a combination of factors including lack of food, rough weather and moulting had triggered the mass little blue penguin fatalities.
"The combination of all of these events have led to the biggest penguin die off in many years.
"There is very little we can do to help these birds apart from offering them peace and quiet," she said. Katikati community ranger for DoC Tracy Mezger said the Tauranga office had received a higher number of calls about dead penguins than this time last year.
Mezger said it had received an average of five calls each week for dead, injured, or unwell penguins since February.
"About half the calls have been for penguins already dead," she said.
"They are a combination of single penguins or multiple penguins dead and washed ashore, both juvenile and adults."
Most of the calls were about penguins washed up on Mount Maunganui Main Beach, which Mezger said was likely because more people visited that beach than others.