A powerful spring storm is pummeling the U.S.Midwest and Plains as summer is put on hold with a late-season storm causing chaos 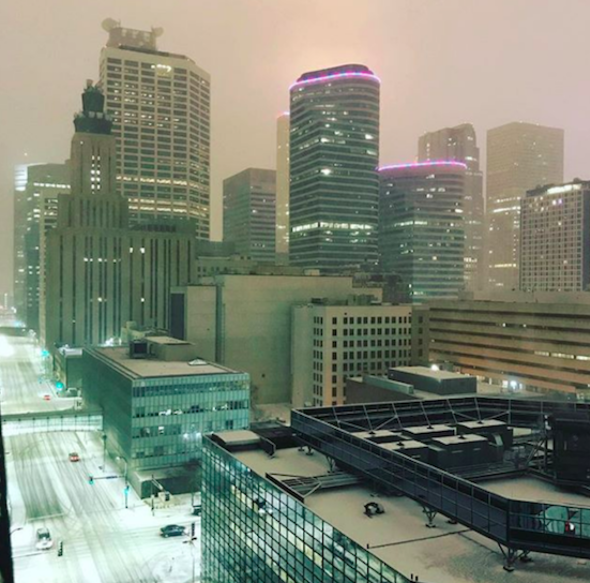 Photo Credit AccuWeather
While most of Europe is enjoying an onset of an early summer spare a thought for our American friends living in the mid-west.
A massive, late-season blizzard is causing chaos as more than a foot of snow will fall across the north-central United States into Sunday night.
While some of the snow will melt at times on area roads, the heavy rate of snow and gusty winds will cause extensive blowing and drifting snow and difficult, if not impossible, travel conditions for an extended period of time this weekend.
According to AccuWeather.com, Interstate 90 across southwestern Minnesota and into South Dakota is among the highways closed due to the blizzard.
Airline passengers should anticipate major flight delays and a high number of flight cancellations centred on the major hub of Minneapolis.
For the second day in a row, the game between the Minnesota Twins and Chicago White Sox was postponed on Saturday. Snow still falling and what has piled up in Target Field may prevent Sunday's game from being played.
Other cities that will be buried by similar totals include Wausau and Green Bay, Wisconsin; and Marquette, Michigan.
As of 2 a.m. CDT Sunday, Green Bay's airport had already received 13.5 inches of snow from the storm.
"The strong wind aspect of the storm, in lieu of snow, can lead to power outages and property damage over a broad area of the Plains," according to AccuWeather Senior Storm Warning Meteorologist Rich Putnam.
On Saturday morning, blizzard conditions occurred at Sioux Falls, South Dakota, with the visibility down to a few hundred feet and winds gusting between 40 and 50 mph. Occasional thunder and lightning were also observed with the snow.
The same storm will continue to trigger severe weather south and east of the snow area with the southern U.S. being threatened this weekend.
In addition to heavy snow, blizzard conditions and severe thunderstorms, a significant buildup of ice may occur in parts of Ontario, northern New York state and northern New England.