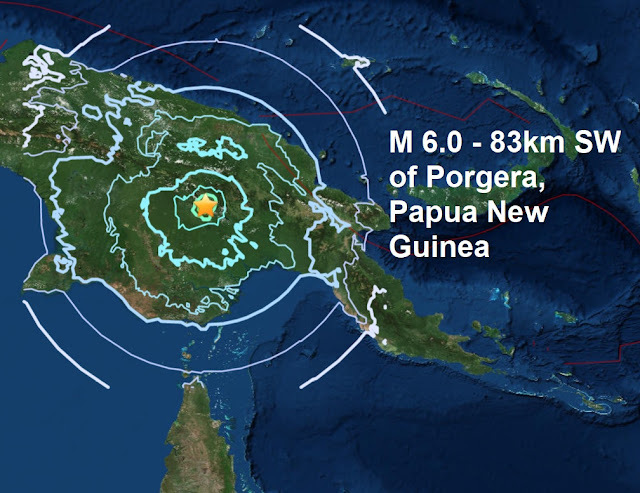 USGS/Click on image to enlarge
A magnitude 6.0 - 83km SW of Porgera, Papua New Guinea is the third major aftershock this week after the mag 7.5 rocked Papua New Guinea last week leaving at least 20 dead and whole villages destroyed.
More than a hundred aftershocks have hit the area most of them large with 3 in the mag 6's.
This morning as a large coronal hole on the sun turned and faces Earth which is, I believe a trigger for major quakes, (24 major quakes have hit our planet this year and 23 of them have occurred during coronal activity on the Sun) I received an email from a researcher, scientist Patrick Geryl.
Patrick is claiming today has a high potential for a magnitude 7.5 plus earthquake due to planetary alignments.
A mag 6.0 falls short of his prediction, however, the day is still young.
Today's major quake is the 24th major quake of 2018 and the first one of March.
At the same period last year, only 14 major quakes had been recorded worldwide in what was to become the lowest year this century for major quakes.