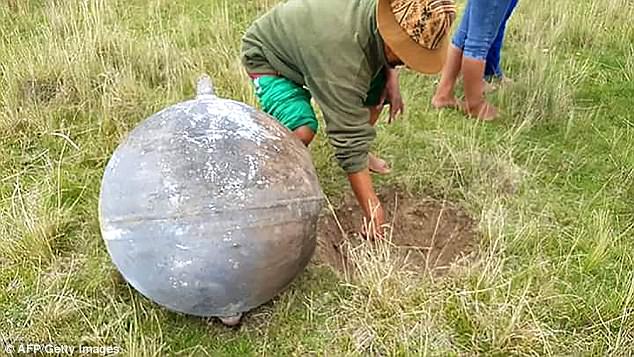 AFP Getty images
Peruvians were left terrified after villagers found three mysterious objects that fell from the sky engulfed in flames.
Residents in the Larancahuani community, in the Andean region of Puno, Peru, feared a meteorite impact after the spheres crashed to the ground on January 27, however no meteors had been predicted to fall in that area.
Earlier in the day, social media lit up as spectacular pictures and footage of a huge ball of fire soaring through the sky was seen over the cities of Tingo Maria and Pucallpa - which are some 115 miles from each other.
But on Tuesday, the Peruvian Air Force said the incident may have been the re-entry of the SL-23 rocket - and the three objects were fuel tanks from a satellite.
Peruvians had thought the fireball, also seen in the Brazilian state of Acre, was a meteorite falling to Earth.
Romulo Barros, the chief of the fire service in the Brazilian municipality of Cruzeiro do Sul, said that the local Navigation Centre had said the object was probably a meteorite.
He added that he believed the object had landed in the border region between the Acre and Peru. Barros confirmed there had been no international flights in the airspace at the time of the incident. However, Meteorologist Alejandro Fonesca, from the Universidade Federal do Acre, stated that no meteorites had been predicted to fall in the area.
He suggested the ball was more likely made up of space debris, a term used to describe defunct man-made objects, such as old satellites, that are left in space.
'When the debris enters the atmosphere it comes under intense friction and this causes it to set on fire. That is what could have happened,' he said.