Just one of those freak things! "No aliens, no cloaking device," hundreds of small starling birds fall from the sky in Utah, US 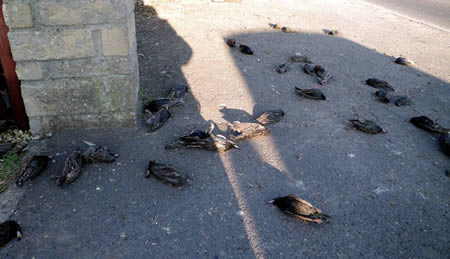 Photo oddee.com
Hundreds of small starling birds fall from the sky in Utah, US while the cause behind it remains a mystery.
In a weird incident which occurred in Utah on Monday, January 29 where more than 200 starling birds fell on the street from the sky, while the cause behind it remains unknown.
According to Sergeant Chad Carpenter with the Draper City Police Department: "It's one of the rarest things I've ever heard of," fox13now.com reported as per say.
"You've seen that black cloud as it's flying all over the place.
Well, that's a starling group and they call that flying tandem or murmuring," Sergeant Carpenter said. Lacey Brown, one of the residents from Utah who was driving through the street witnessed this mysterious incident.
Lacey stated that: "As I was driving, these birds were just falling out of the sky.
They were all on the ground right around here and on the roadway," Brown said, "They were just falling out of the sky like leaves," as reported by fox13now.com.
The birds fly together in flocks while staying close to each other during winter to stay warm and also to stay protected from their prey, experts revealed.
As per the speculations made by netizens, the flock of birds was killed because of aliens, a supernatural UFO attack, they were poisoned or they were struck by a thunderbolt.
"No aliens, no cloaking device," Carpenter said, "No poison, it was just one of those freak things where the birds were just flying along, crashed into the side of a large vehicle and boom," he added, fox13.com stated.
The witness Lacey pulled over to help the birds and she saw one man shovelling the birds out of the road.
"It was not a sight for the faint of heart," Lacey said as quoted by fox13.com.
Draper Animal Services was also present on the scene to help in collecting the birds that were still alive.
Around 17 of these hundreds of birds were found alive and were transferred to the rehabilitation centre report revealed.
The birds will be released into the wild once they recover.