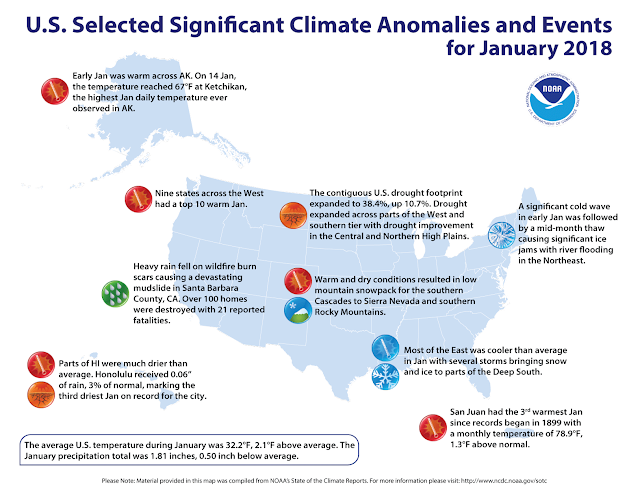 Credit NOAA/ Click on image to enlarge
An incredible statistic just released by NOAA shows whilst record snow and cold hit most of the US in January including Florida and the Gulf of Mexico, in fact, all 50 states were covered in snow at one stage during January, Alaska experienced the warmest January temperature on record: On January 14, the temperature at an NOAA tide gauge at Ketchikan reached 67 degrees F, the highest January daily temperature ever measured in Alaska, besting the previous record of 62 degrees set in January 2014.
What sticks in my mind most in January was the incredible cold. Most of the Gulf coast and deep South woke up on the morning of the 17th to sub-zero temperatures which cancelled flights, disrupted traffic and closed schools and businesses.
Crippling winds and record-breaking low temperatures were recorded in New Orleans and other cities in the US deep south.
The blast of cold air shattered records early Wednesday (the 17th) in Louisiana and Mississippi.
In Houston, the nation’s fourth most populous city, most freeways were closed on the morning of the 17th after icing over, the city’s Office of Emergency Management said.
According to Reuters New Orleans had record-breaking cold temperatures Wednesday morning with 16.34 degrees Fahrenheit in the area, smashing its previous record 23 degrees set in 1977, according to the NWS.
It was the second time already in 2018 freeze warnings had been issued for deep south and the Gulf Coast.
Hattiesburg, Mississippi, also broke temperature records with 12 degrees Fahrenheit on Wednesday the 17th, beating its 14 degrees also set in 1977.
The US has had a tough start in 2018, with some parts considered colder than Mars and the North Pole in January.
Remarkable stat's were being banded around.
The Atlantic White Shark Conservancy said it had found five dead thresher sharks frozen to death on the shore of the Cape Cod Bay in Brewster, south of Boston.
Glass windows were said to be cracking on Chicago's new Apple building from the extreme cold temperatures.
Low temperatures in the minus 40 deg F (-40 deg C) had been recorded in northern Minnesota in January.
According to the Weather Channel, New Year's weekend in the Plains, Midwest, South and East, shattered many daily cold records into the first days of 2018.
Many cities had their coldest new years eve ever while many cancelled celebrations.
Niagara Falls turned to ice as temperatures plummet to record-breaking lows.
The Sun reported, it was the coldest New Year in living memory as 220 million Americans wrapped up to face lows of -37 degrees Celsius.
A temperature of -35C was recorded in Mount Washington Observatory in New Hampshire — the highest peak in the northeastern United States — breaking a record set back in 1933.
With temperatures colder than domestic freezers, data from the Curiosity Rover, which is roaming the red planet, showed temperatures on Mars reached a comparatively balmy -23C on January 20, and with temperatures around -21 deg C or lower the North Pole has been actually warmer than parts of the US in January.

Here’s how last month fared in terms of the climate record:

Climate by the numbers
January 2018
During January, the average temperature for the contiguous U.S. was 32.2 degrees F, 2.1 degrees above average, ranking among the warmest third in the 124-year record, according to scientists from NOAA’s National Centers for Environmental Information.