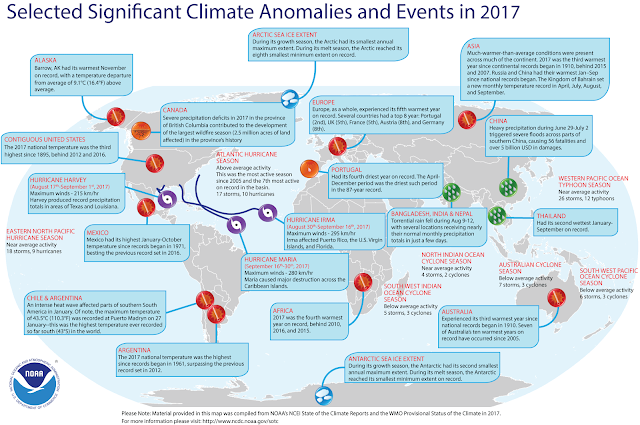 A map of the globe of that indicates noteworthy climate and weather events that occurred around the world in 2017. (NOAA NCEI) Click on image to enlarge
NOAA and NASA scientists confirm Earth’s long-term warming trend continues...

This week was the first time the US had snow on the ground in all 50 states at the same time since Feb 2010
Crippling winds and record-breaking low temperatures were recorded in New Orleans and other cities in the US deep south this week.
The blast of cold air shattered records early Wednesday in Louisiana and Mississippi.
It's the second time already in 2018 freeze warnings for deep south and the Gulf Coast have been recorded.
The US has had a tough start in 2018, we are just into the fourth week and already parts of the US has been considered colder than Mars and the North Pole.
In Russia, this week the Yakutia region saw temperatures of -84F ( -64.4°C) are shattering and bursting thermometers so it might come as a surprise to some of you to be told 2017 was the third warmest year ever recorded on planet Earth and 2017 would have been warmer than the hottest years 2016-2015 if they hadn't had help from a strong El-Nìno.
According to NOAA, Earth’s globally averaged temperature for 2017 made it the third warmest year in NOAA’s 138-year climate record, behind 2016 (warmest) and 2015 (second warmest).

However, unlike the past two years, Earth’s average temperature in 2017 was not influenced by the warming effect of an El Nino, say scientists from NOAA's National Centers for Environmental Information (NCEI).

The average temperature across the globe in 2017 was 1.51 degrees F above the 20th century average of 57 degrees F. 2017 marks the 41st consecutive year (since 1977) with global land and ocean temperatures at least nominally above the 20th-century average.
The six warmest years on record for the planet have all occurred since 2010.

The state of sea ice
Sea ice extent (coverage) at the poles remained low throughout last year.
Antarctica had a record-low extent in 2017, while the Arctic had its second-lowest ice coverage on record.

2017, as ranked by other scientific organizations
In a separate analysis of global temperature data released at the same time, NASA scientists ranked 2017 as the second warmest year on record.
The minor difference in rankings is due to the different methods used by the two agencies to analyze global temperatures; though, over the long term, the agencies’ records remain in strong agreement. Both analyses show that the five warmest years on record all have taken place since 2010.

Analyses from the United Kingdom Met Office and the World Meteorological Organizationoffsite link also ranked 2017 among the top three warmest years on record.

Additional findings from our 2017 report
The month of December: Despite the cooling influence of a weak La Nina in the latter part of the year, December ended up as the fourth warmest December on record for the globe, with an average temperature 1.44 degrees F above the 20th-century average.

The globally averaged sea surface temperature was the third highest on record, 1.21 degrees F above average.

The globally averaged land surface temperature was the third highest on record, 2.36 degrees F above average.

Continental warmth: South America had its second warmest year on record; Asia, its third; Africa, its fourth; Europe, its fifth; and North America and Oceania, their sixth.

The average Arctic sea ice extent for the year was 4.01 million square miles, the second smallest annual average since record-keeping began in 1979.

The average Antarctic sea ice extent for the year was 4.11 million square miles, the smallest annual average since record-keeping began in 1979.