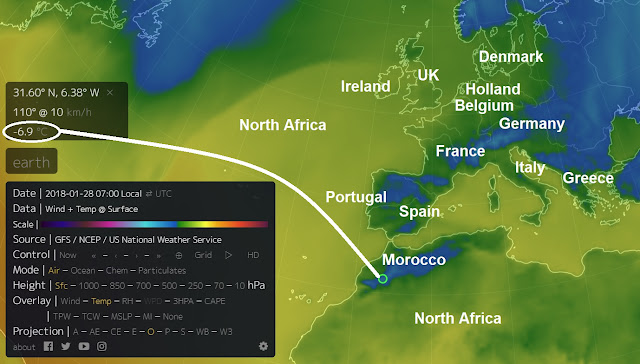 Earthwindmap
Heavy snow and unusual, extreme cold weather in January has cut off thousands from major transport routes in Morocco's High and Middle Atlas regions, raising the risk of food shortages and dangerous living conditions for the affected communities.
The combination of heavy snow and temperatures dropping as low as -7° C has caused water supply shortages, power outages, lack of heating and damage to homes.
As food supplies dwindle farmers have reported the loss of livestock, prompting a surge in food prices.
More than 100 volunteers and staff from the Moroccan Red Crescent have been deployed to central mountainous provinces to provide emergency transport and medical assistance as well as to distribute food, blankets and supplies.
The Moroccan Red Crescent assistance is part of the Government's response to support 700,000 people affected by the cold wave.
"This is an area that rarely sees temperatures drop below 18°C in winter which makes these people very vulnerable to the extreme cold.
They have very little clothing and heating in their homes to keep them warm which puts them at serious risk of freezing and disease," said Amelia Marzal, Head of Country Cluster for the Middle East and North Africa Region at the International Federation of Red Cross and Red Crescent Societies (IFRC).
The IFRC has released nearly 250,000 Swiss francs from its Disaster Relief Emergency Fund (DREF) for the Moroccan Red Crescent volunteers to continue providing emergency assistance and psychosocial support for 17,500 people most affected by the cold snap over the next three months.