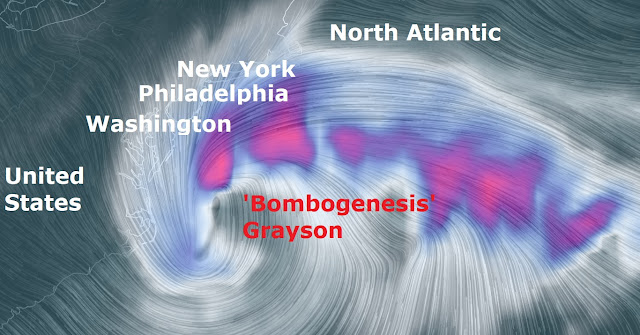 Earthwindmap Click on image to enlarge
A 'Bombogenesis' takes aim at U.S. Northeast adding to the crippling cold, bringing strong winds and blizzards and delivering the most powerful winter storm of the season for the Mid-Atlantic States and the Northeast Thursday.
The storm named Grayson has caused the cancellation of 3,000 flights with more than 5 inches of snow expected in New York and New England.
The massive storm named as a “bomb cyclone” for its sharp drop in atmospheric pressure, forced flight cancellations and school closings up and down the East Coast.
The National Weather Service issued warnings: A strong storm near the Mid-Atlantic Coast will travel northeastward into
Southeastern Canada by Friday morning.
The storm will produce heavy snow along the Mid-Atlantic Coast into Southern New England by Thursday morning that will move northward into the Northeast by Thursday afternoon while
ending over the Mid-Atlantic Coast by Thursday evening.
The heavy snow will continue over the Northeast overnight Thursday beginning to wane on Friday morning.
A rare winter storm hit the US Southeast on Wednesday, bringing Florida's capital its first snow in three decades and snarling travel.
The governors of Florida, Georgia, Virginia and North Carolina declared states of emergency, warning residents to expect icy roads and unseasonable freezing temperatures, according to the Dail Mail.